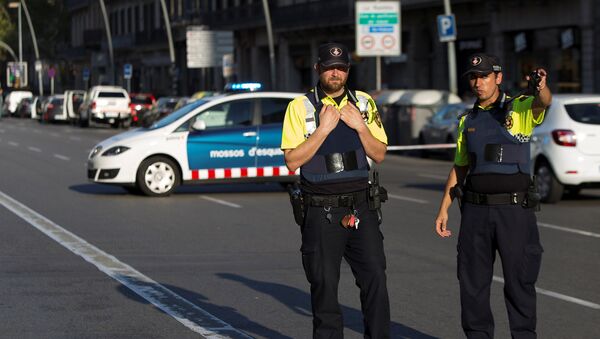 MADRID (Sputnik) — The Spanish Europa Press news agency reported, citing a source in the country's Interior Ministry, that the authority had ordered to step up policing at the border after the session of the anti-terrorism committee in Madrid in which the heads of all the country's law enforcement agencies had taken part.

France has already tightened security measures at the Spanish border on Friday following Thursday's terror attacks. According to Moroccan media reports, the country has also strengthened border controls at the Spanish North African enclaves of Ceuta and Melilla to prevent terrorists from hiding on its soil.

The Spanish 24 Horas broadcaster also reported that the house of Imam Abdel-Baki es-Sati in the city of Ripoll had been raided. Es-Sati is reportedly considered by the authorities as one of those killed in the blast of a house in Alcanar where another attack with the use of explosives had allegedly been planned. Before going missing, es-Sati told his neighbors he was planning a trip to Morocco.

'Spain is Not Yours', Last Thing Spanish Society Needs After Barcelona
On Thursday, a van hit pedestrians in the center of Barcelona, killing over a dozen and reportedly injuring over 130 others. Hours after the incident, another vehicle attack took place in Catalonia's southern town of Cambrils. In the attack, a police officer and six civilians were injured and at least one of them died later. The responsibility for the van attack in Barcelona was reportedly claimed by Daesh terror group (IS, outlawed in Russia).

A source in the Interior Affairs Council of the Catalan government told Sputnik earlier on Saturday that Spanish law enforcement were working on determining the location of three members of the terror cell behind Thursday's van attacks. Two of the suspects are believed to have died in the blast in Alcanar while the suspected driver of the van in the Barcelona attack had reportedly fled the scene on foot and is still on the run. Media suggested that Spanish police was searching for Moroccan national Younes Abouyaaqoub, 22, considering him to be the perpetrator of the Barcelona van attack.