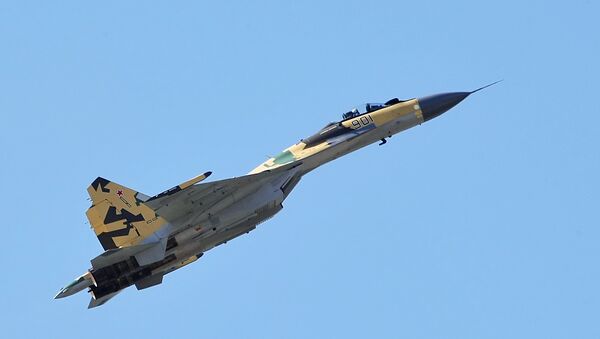 The global demand for military aviation has dramatically risen with its share in Russia's Rosoboronexport's supplies at the end of the year expected to exceed 50%, the company' Director General Alexander Mikheev said.

The expert of the military and political journalism center, Boris Rozhin, told Radio Sputnik about the "competitive advantages" that Russia has in the arms market.

"Russia continues to return not only to the markets it had lost after the collapse of the Soviet Union, but it also enters so-called 'disputed' markets, where it [Russia] competes with the EU countries and the US, as it has competitive advantages related to relatively cheap cost of its products and their high efficiency," the expert said.

T-90 and 'Terminators': Russian Weapons to Supercharge Iraqi Army
"This applies to modern weapons, which we see in Syria, for examples, but also to obsolete weapons that can also be bought as such equipment is very suitable for less developed countries. While new models of weapons are suitable for the Middle East, southeast Asia and some countries in South America. It is unlikely that the international situation will soon lead to a de-escalation, thus, I think that Rosoboronexport supplies will only increase."

In addition, he noted, a number of countries wanting to improve relations with Russia prefer to buy the country's weapons.

"As for air defense systems, we see that Turkey, which has traditionally been in the sphere of influence of NATO states' arms supplies, is now interested in Russian [S-400 air defense] systems. It is clear that there is a big political component here, but the Russian policy in the Middle East, among other things, promotes Russian weapons. Many countries would like to improve relations with Russia that were spoiled during the 'Arab spring.' And now these supplies are being considered by them as a way to consolidate these relations," Rozhin concluded.

Turkey Wants to ‘Ease Dependence on NATO’ by Purchasing Russian S-400
The Russia-Turkey talks on the delivery of S-400 systems have taken place since 2016. In March, Sergei Chemezov, CEO of Russia’s Rostec Corporation, said Ankara was ready to buy the systems with a loan granted by Moscow. In late July, Turkish President Recep Tayyip Erdogan said that Ankara and Moscow had signed a document on supplies of the S-400 Triumf missile systems.

Earlier in the day, the head of Russia's Federal Service for Military-Technical Cooperation (FSMTC) said that Russia's arms order export portfolio will stand at $48-50 billion in the coming years, while annual exports of arms will amount to about $15 billion.