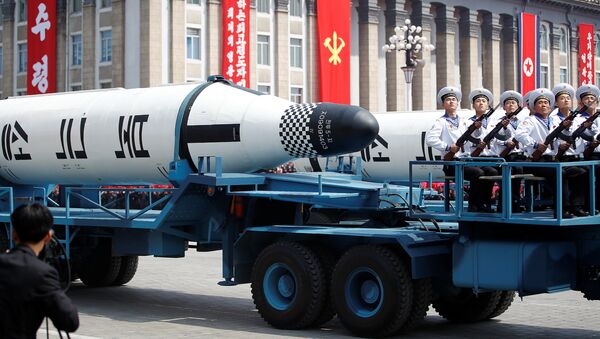 The United States has intelligence that the engines that power North Korean ballistic missiles allegedly came from Ukraine. In an interview with Sputnik, Polish journalist Janusz Niedzwiedzki said that US media reports to this effect “sound quite reasonable.”

“Since Maidan, Ukraine’s economy has been in tatters and corruption is rampant like nowhere else in the other post-Soviet states or the EU. Small wonder that some people working at Ukraine’s rocket engine enterprises could have sold the know-how to the North Koreans. I don’t think the Ukrainian government knew about this, though,” Janusz Niedzwiedzki told Sputnik Poland.

He said he was worried by the prospect of Ukraine getting lethal weapons from the US, which he fears would mean that Washington is trying to stoke up the armed conflict in Donbass.

Rogozin: Ukraine Could Have Sold Missile Engines Directly to North Korea
“If President Trump decides to supply such weapons to Kiev, it could then use this as a factor in talks with Russia about Ukraine’s future. This could lead to a new escalation of the conflict,” Janusz Niedzwiedzki added.

Experts believe that if Pyongyang obtains advanced rocket engine technology from Ukraine’s Yuzhmash plant this would give a boost to the country’s missile program. However, North Korea has been working on its own such rocket technologies and has achieved impressive results in this area.

The New York Times earlier cited a team of US experts as saying that North Korea could have obtained modified RD-250 high-performance liquid-propellant engines for its ballistic missiles in Ukraine.

Despite Kiev’s quick denial that these engines are actually produced in Ukraine, Washington is absolutely convinced that Pyongyang purchased their engines from Ukraine.

Russian pranksters Lexus and Vovan later got in touch with the director of the Yuzhmash plant posing as the head of Ukraine’s National Security and Defense Council.

During the exchange the unsuspecting Yuzhmash director admitted that their rocket engines might have found their way to North Korea via China.

“We don’t know for sure if [Yuzhmash technology] actually got to North Korea, but if it did, this would have clearly sped up the country’s development of means of delivery of nuclear warheads,” independent military expert Vladimir Novikov said during a Moscow-Beijing video link organized by Russia Segodnya news agency.

He added that if true, this technology transfer could have been a multi-stage operation.

“If [Ukraine] did sell [this know-how], this could have been done via third and fourth countries. If this is what really happened, it will help the North to develop medium- and long-range ballistic missiles and even intercontinental ones capable of flying up to 11,000 kilometers [6,800 miles] away,” Novikov continued.

He also said that it wouldn’t take long for North Korean specialists to adapt this new know-how “after decades of successful work on their missile and nuclear program.”

Ukrainian Weapons in N Korea: Missile Engines Could Be 'Copied', Developers Say
“There has been much talk going on about missile technology. [The North Koreans] have used foreign know-how, but they keep improving their own technology and they are making good progress too,” Yang said.

He also mentioned numerous channels now existing in the world which countries can use to obtain technology.

“What is really important here is that North Korea has come a long way in this area and has accumulated a wealth of its own technological solutions. That’s why, sooner or later, they were bound to make a breakthrough and this is exactly what we can see happening now,” Yang Danzhi concluded.

Meanwhile, Ukraine’s former Prime Minister Yulia Tymoshenko said that if the reports about rocket engine technology transfers to North Korea are confirmed, this would “mean a catastrophe for Ukraine.”

Tensions around Pyongyang's missile program have flared up in the recent weeks, following the adoption of the UN Security Council sanctions, which led to North Korea trading threats and warnings with the United States.

Most notably, Pyongyang said it might consider an attack on the area near the US territory of Guam in the Western Pacific.