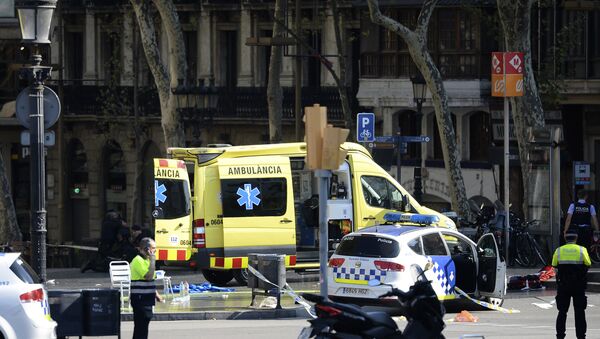 The recent terror attacks in Spain were not aimed against tourists, but targeted the proactive and world-exploring lifestyle, Catalonia’s President Carles Puigdemont said Friday.

MADRID (Sputnik) – The attack "did not target tourism, but the lifestyle," Puigdemont said in an interview to the local RAC1 radio station.

"We all travel, we crave for exploring something new, new destinations," he explained.

The Catalan President also stressed that he was "pleasantly surprised" to see tourists in Barcelona's center next to the place where the attack occurred. This is "a good sign," Puigdemont said.

Catalan Police Confirm Explosive Belts on Cambrils Attackers Were Fake
On Thursday, a van mowed down a crowd of pedestrians in the central Ramblas area in Spain’s tourist resort of Barcelona, leaving 13 people dead and over a hundred injured, in what police said was an act of terrorism. The Daesh terrorist group (outlawed in Russia) claimed responsibility for the attack.

Several hours after the Barcelona tragedy, a van rammed into a crowd of passers-by in the coastal town of Cambrils 74 miles south of the Catalan capital, injuring seven people, including a police officer. In a following counter-terrorist operation, four attack suspects were killed and one died from wounds later.

Prior to the Barcelona and Cambrils attacks, an explosion rocked the Catalan town of Alcanar on Wednesday night, followed by a second blast occurring in the town a day later, killing one and injuring over ten people. The police said they were examining a connection between the Alcanar blasts and Thursday’s van attacks in Barcelona and Cambrils.

As of now a total of three suspects have been detained. Authorities estimate that up to eight people may have been involved in the Barcelona and Cambrils rampages, as well as the house explosion in the coastal town of Alcanar.