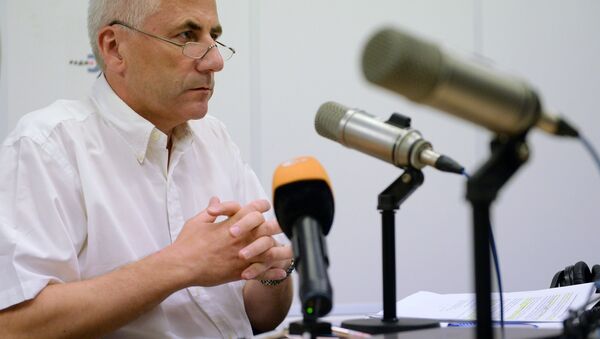 Moscow has no intention of attacking NATO member states, but Lithuania should remain vigilant and ready to defend itself rather than be frightened, EU Ambassador to Russia Vygaudas Usackas said on Friday commenting on the forthcoming Russia-Belarus joint military exercise Zapad-2017 ("West-2017").

VILNIUS (Sputnik) — The Zapad-2017 military drills are scheduled for September 14-20 and are expected to involve around 3,000 Russian troops.

"We have to be vigilant, but not coward… We are too intimidated both from within and from the outside. But, undoubtedly, we must be ready to defend our homeland, allocate necessary funds for the army, military equipment, increase the number of volunteers," Usackas, who is also the former Lithuanian foreign minister, said in an interview with the Respublika news portal, stressing that Russia "was not going to attack NATO countries."

In April, Lithuanian Prime Minister Saulius Skvernelis reiterated his concerns over the exercises and said that they could increase the risks of unforeseen incidents. Russia has repeatedly refuted allegations of Moscow's military threat to the Baltic states.