Why It's Hard to Prevent Barcelona-Style Attacks Despite Intelligence Warnings 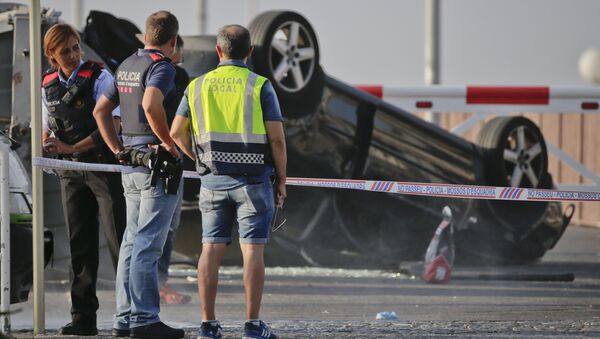 Following the van attack in Barcelona, Spanish media reported that the CIA had warned Catalan police two months ago about a possible attack on Las Ramblas. Sputnik spoke with counterterrorism officer Tomas Olivier, who explained why such attacks are "almost impossible" to prevent and how the warning helped to prevent the attack in Cambrils.

On Friday, Catalonian newspaper El Peridoco reported that back in June, the CIA told Los Mossos, the Catalonian regional police force, that Barcelona was a top target for jihadist terrorists.

"Two months ago the Central Intelligence Agency passed a notice to the Catalan autonomous police," the paper said. "It even warned of the risk to Las Ramblas."

Van Crashes Into Dozens of People in Barcelona's City Center (PHOTO, VIDEO)
The reported warning followed a series of similar vehicle attacks in London, Stockholm, Berlin, and Nice and came amid mounting concern among Spanish and foreign intelligence agencies that the Catalan capital could be next on the jihadist hit list.

"These warnings had without a doubt an effect on the current reality, in which the Spanish National Police and other Law Enforcement bodies have already prepared themselves against these horrific eventualities," he wrote to Sputnik.

"Spanish counterterrorist institutions have a respectful reputation with regards to initiating 'intelligence driven' operations and in preventing possible terrorist attacks. Basically one can argue that the 'intervention' in Cambrills (which I personally visited less than three weeks ago) in which five suspected IS-suicide commandos were lethally neutralized, can be characterized as excellent policing," he further elaborated.

The officer noted that it was a "direct response in their quest to try and locate the Barcelona perpetrators."

People From at Least 24 Countries Injured in Deadly Terror Attacks in Spain
This 'continuity' attack can obviously directly be linked to the attack in Barcelona a few hours earlier. Spanish National Police authorities underlined this premise as well, he wrote.

"It, once more, underlines that pressure from law enforcement institutions on specific terrorist cells in the 'endstate' of targeted intelligence work intrinsically speeds up their operational planning phase and results in a swift decision-making process in which terrorists decide to instantly strike and in this scenario, yet again, pick an iconic tourist target."

The time of the attack, early Friday morning, Tomas Olivier noted, is an indicator that the cell indeed, most likely, felt that they had to strike instantly.

"But again, authorities might not have had imminent information (or intelligence) regarding the Ramblas carnage but the targeting of these five individuals by the Spanish Police forces, without 'significant' damage or large amounts of casualties, is an example of excellent policing and should not be disregarded," he said.

The officer further explained why such attacks are "almost impossible" to prevent.

The Jihadist terrorist modus operandi has constantly changed and fluctuated throughout history, he wrote to Sputnik.

"The 'vehicle' or ramming attack is a 'choice of weapon' that we have witnessed a lot in the last couple of years in Israel, where Israeli citizens and or security forces were targeted by Palestinian extremists not with explosive devices or small arms fire weapons but with 'vehicles' or, ever so often, confronted with the so-called melee-attack in which simple tools (read: weapons) like knives or sharp objects are being used to intentionally hurt or kill people."

'Don't Put Daesh and Basque Nationalists in the Same Basket': Here Is Why
The 'exportation' but also 'evolution' of this modus operandi to urban areas in Western Europe, he said, is something we have previously observed in, for instance, Berlin, Nice, Paris and London.

A combination of the 'vehicle' and the 'knife' (or semi-automatic rifle) is apparently the favorite and contemporary weapon from a morbid terrorist perspective. From a professional perspective, he acknowledged, it appears to be extremely effective.

"Due to the fact that even in the reality of the 'collection, processing and analysis' of big data by intelligence agencies, 'digital policing' and the awareness of actual (and imminent) threat it is almost impossible to pro-actively prevent; these 'non-technical' attacks. Therefore Law Enforcement institutions, police forces and appropriate legislation can only shape an environment in which they temporarily neutralize a threat in order to protect citizens (and tourists) against these atrocities," Tomas Olivier finally stated.