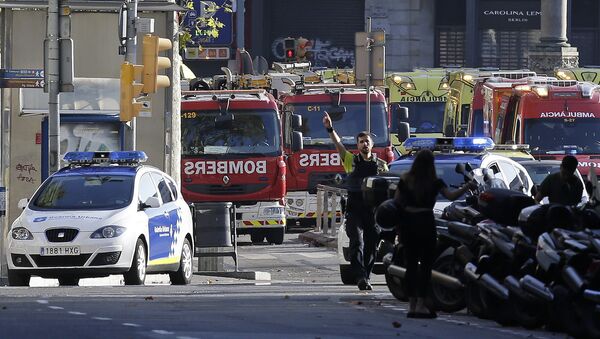 The Catalan government’s Justice Minister Carles Mundo Blanch confiremed at a press conference on Friday that the foreigners were among the victims of the Barcelona attack.

"There are several victims of the Spanish nationality, and there are other victims of foreign nationalities," he said.

Commenting on the reports, Spain's Tourism Ministry said it could not determine whether the casualties among foreign nationals could affect the flow of tourists to the country.

"It's too early to determine if it's going to affect the sector of tourism in Spain. Right now we are supporting what local authorities are doing. And of course, all ministries are in contact," the press officer of Ministry of Energy, Tourism and the Digital Agenda told Sputnik.

Barcelona Mourns for Victims of Thursday Terror Attack (VIDEO)
A van drove into a crowd of pedestrians in the central Ramblas area in Barcelona on Thursday, leaving 13 people dead and over 100 injured, in what police said was an act of terrorism. The Daesh terror group (outlawed in Russia) claimed responsibility for the attack.

Hours after the tragedy in Las Ramblas avenue another vehicle attack took place in the coastal town of Cambrils, south of Barcelona. Six civilians and a police officer were injured, with some of them remaining in critical condition.

As of now a total of three suspects have been detained. Authorities estimate that up to eight people may have been involved in the Barcelona and Cambrils rampages, as well as a house explosion in the coastal town of Alcanar late Wednesday.