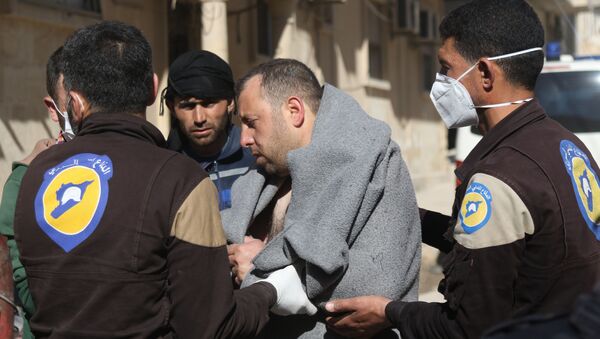 The statement comes after Syrian Deputy Foreign Minister Faisal Mekdad accused US and UK-based companies of supplying toxic agents to terrorists, adding that CS and CN substances, allegedly produced by NonLethal Technologies and Chemring Defence, were found in Aleppo and Damascus.

"Department of Defense assistance to Vetted Syrian Opposition groups is limited to those groups fighting ISIS [Daesh]. That assistance does NOT now, nor has it ever, included chemical agents like you describe," Pahon said.

Syria Has Right to Address UN as Alleged Western Chemical Weapons Found - MP
Russian Foreign Ministry spokeswoman Maria Zakharova said the fact that the United States and the United Kingdom could have supplied toxic agents to militants in Syria is "beyond understanding."

The Organization for the Prohibition of Chemical Weapons said in June that its fact-finding mission confirmed that man-made chemical sarin, a gas used as a chemical weapon, was used in an attack on Khan Shaikhoun in Idlib in early April, but did not determine who was responsible.

The US-backed militias blamed the use of chemical weapons on the Syrian government, despite Syrian President Assad told Sputnik following the attack in April that there was no chemical weapons  in Idlib.

000000
Popular comments
the pentagon are a bunch of liars.