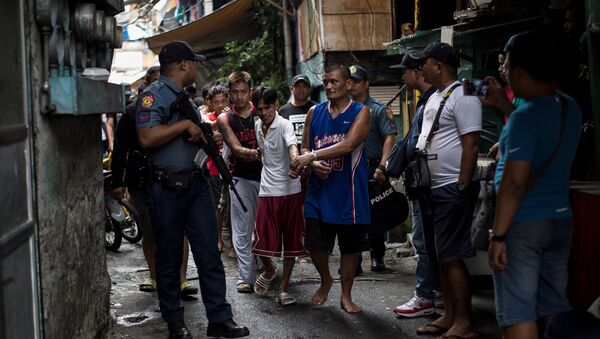 The Philippine police forces have killed 32 suspects, arresting 107 others in a number of anti-drug operations, held across the country's Bulacan province, which is located 7 miles to north of Manila, media reported Wednesday citing local authorities.

MOSCOW (Sputnik) – According to the CNN broadcaster, citing the Bulacan Provincial Police Office, the police officers conducted 49 buy-bust operations and 14 searches in different parts of the province, including the provincial capital of Malolos. The police also said that they had managed to seize almost 2 pounds of illegal drugs.

"The Bulacan police is continuously and relentlessly implementing its intensified campaign against illegal drugs otherwise known as 'Project Double Barrel Reloaded' and all other forms of criminality," the province's police said, as quoted by the broadcaster.

Philippine Army Pursues Offensive Against Daesh-Linked Terrorists in Marawi
Philippine President Rodrigo Duterte was sworn in as the president in June 2016 on promises to crack down on illegal drugs and put an end to drug-related crimes in the country. Shortly after taking office, Duterte launched a large-scale anti-drug campaign, during which police have killed thousands of people. The campaign has been widely criticized by international community and human watchdogs. In early March, the police relaunched anti-drug campaign, claiming that it would be "less bloody."
Newsfeed
0
Access to the chat has been blocked for violating the rules . You will be able to participate again through:∞. If you do not agree with the blocking, please use the feedback form
The discussion is closed. You can participate in the discussion within 24 hours after the publication of the article.
To participate in the discussion
log in or register
loader
Chats
Заголовок открываемого материала