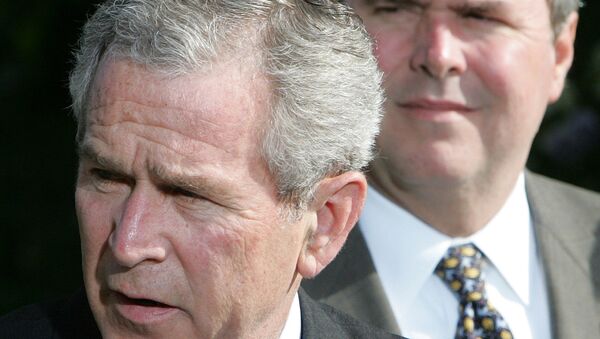 Loud and Clear host Brian Becker was joined by John Kiriakou, a former CIA analyst who gained celebrity for confirming to the press that the Central Intelligence Agency (CIA) had used waterboarding to interrogate al-Qaeda prisoners in 2007. He spent over two years in prison after being convicted for violating the Intelligence Identities Protection Act by providing classified information to the New York Times for a 2008 story on waterboarding.

​​Becker asked Kiriakou why the CIA program to arm and train anti-Assad rebel groups had failed and was being shuttered. "In its arrogance, the CIA, the NSC [National Security Council], the White House, the State Department, even the Pentagon, never have an endgame," Kiriakou replied. "It's easy to overthrow a government — the hard part is then building something that is that is legitimate and survivable and democratic afterwards."

"When you couple that with the fact that none of these countries have a democratic legacy or history, that democracy really is a Western idea that's being imposed on them by occupiers, well, there's no chance of anything happening.""

Kiriakou cites the US bombing campaign in Libya that ended in the death of Libyan dictator Muammar al-Gaddafi. "There was no plan for what happens after he dies, there was no plan for how to mediate between the tribes … or with movers and shakers in the Libyan government or even with technocrats or bureaucrats who could then be elevated into the government, to form something that would actually function and get the oil pumped and get the revenue coming in. There was no such plan, just like there was no such plan in Syria.

Before Libya, it was the American invasion of Iraq to depose Iraqi dictator Saddam Hussein that was meant to be a quick and easy victory, but which devolved into a quagmire as Islamist insurgents fought a guerrilla war against the Western occupiers. "Al Qaeda hated Saddam Hussein as much as they hated the United States. He was a bulwark against fundamentalism and against Iran, and whether or not we like his politics should have been irrelevant. If you look at the rest of the region and you look at ideologies that are competing for authority in the region, Saddam Hussein was the best friend that we could have hoped for at that time."

The failed CIA program in Syria threatened to take the beleaguered state down the same road as Libya and Iraq, according to Kiriakou. "In Syria, Bashar al-Assad whether you like him or not, is the only thing standing between the Christian community and their annihilation. That's it. Over the generations, Christians have thrived in Syria. They've been successful businessmen, they've been cabinet ministers, they've been members of parliament, they serve openly in the military, they're free to practice their faith in churches and cathedrals around the country. Well, when Assad goes and [Daesh] takes over, guess what? [Daesh] is going to execute all of those Christians, at least the ones who can't run away."

"I'm not saying Assad's a nice guy. I'm not saying that he hasn't murdered thousands of his own people, he has. He's a bad guy. But it's possible to have a scenario where there is no good guy and so you have to choose the lesser of the evils."

After over a decade of warfare in Iraq and Afghanistan, according to Kiriakou, al Qaeda has been defeated — but what does the US have to show for their efforts? "For all intents and purposes there is no such thing as al Qaeda anymore. Our intention in Afghanistan was to destroy al Qaeda. We won, we succeeded, it's over, but somehow the policy morphed into nation-building."

Becker asked, after almost 16 years of fighting the War on Terror, what is Kiriakou's evaluation of the effort? "I think, frankly, that Osama bin Laden won," the former CIA agent replied. "His goal was to impact our economy, he did. His goal was to mire us in a never ending war, he succeeded. Every time we bomb a village, every time we launch a drone strike, we help al Qaeda or [Daesh] or the Taliban recruit new terrorists.

"I'm proud to say that I've been personally responsible over the years for the capture of dozens of al Qaeda fighters, but I can tell you that, to a man, almost none of them were ideological. None of them had read the Koran, none of them knew the prayers. They were poor, they were illiterate, they had no job training, they couldn't find a wife because no man would want his daughter to marry somebody like this."

"The local imam approached them and said, 'hey, why don't you go to Afghanistan and makes jihad against the Americans? We'll give you $50 a month, we'll give your family $500 if you're martyred. You don't want to stay here in this village, you don't have anything going in this village.' And that's why they went to Afghanistan, not because they had any specific beef against the Americans until we started bombing their villages and killing their family members. Then they became ideological and then they wanted to fight us that's why we're never going to be able to win this war because we create more and more terrorists."

000000
Popular comments
If Pres. Assad was that bad, his people would have been rid of him a long time ago... I see the contrary, in spite of the Us of Na's propaganda. That country which may end up one day being called ' that entity'.... they would have deserved it... please N.A., restrain yourselves, give lesser military powers a breathing space, give NK a present, postpone any more military manoeuvres off Korea, SEE THE RESULT, within weeks you would see results of your understanding of basic psychology. Right NA: you do not like being threatened, do you think NK likes being threatened by you whose bases practically touch NK ? Remember NA and your threats to annihilate them , accounts will be settled one day, somehow, somewhere. Keep this in mind. You have plenty of opportunities to save face, honourably, slowly, remove your bases outside your territory and bring them home in NA where you belong. If the elites controlling you want another solid base, let them look around...Good NA peoples, all your attention /energies should be used to stop interfering around the globe. Remember the multi-polar world is born and growing, and YOU will benefit. First , stop your aggression everywhere. God help you, may He bless you as well, keep his Laws and the Faith, you will see the results and spiritual 'dividends'....
armor
17 August 2017, 08:52 GMT
000000
Newsfeed
0
New firstOld first
loader
LIVE
Заголовок открываемого материала
Access to the chat has been blocked for violating the rules . You will be able to participate again through:∞. If you do not agree with the blocking, please use the feedback form
The discussion is closed. You can participate in the discussion within 24 hours after the publication of the article.
To participate in the discussion
log in or register
loader
Chats
Заголовок открываемого материала
Worldwide
InternationalEnglishEnglishMundoEspañolSpanish
Europe
DeutschlandDeutschGermanFranceFrançaisFrenchΕλλάδαΕλληνικάGreekItaliaItalianoItalianČeská republikaČeštinaCzechPolskaPolskiPolishСрбиjаСрпскиSerbianLatvijaLatviešuLatvianLietuvaLietuviųLithuanianMoldovaMoldoveneascăMoldavianБеларусьБеларускiBelarusian
Transcaucasia
ԱրմենիաՀայերենArmenianАҧсныАҧсышәалаAbkhazХуссар ИрыстонИронауОssetianსაქართველოქართულიGeorgianAzərbaycanАzərbaycancaAzerbaijani
Middle East
Sputnik عربيArabicArabicTürkiyeTürkçeTurkishSputnik ایرانPersianPersianSputnik افغانستانDariDari
Central Asia
ҚазақстанҚазақ тіліKazakhКыргызстанКыргызчаKyrgyzOʻzbekistonЎзбекчаUzbekТоҷикистонТоҷикӣTajik
East & Southeast Asia
Việt NamTiếng ViệtVietnamese日本日本語Japanese俄罗斯卫星通讯社中文（简体）Chinese (simplified)俄罗斯卫星通讯社中文（繁体）Chinese (traditional)
South America
BrasilPortuguêsPortuguese
NewsfeedBreaking
12:30 GMTIranian Commander Says US’ ‘Humiliating Escape’ From Afghanistan Lesson for Dependent Allies
12:30 GMTIndia's Top Sikh Organisation Suspects Attack on Washington Worship House is Racial
12:21 GMT‘Disappointed’ Senate Dems Blocked From Attaching Immigration Reform to Biden's Massive Budget Bill
12:16 GMTIt's a Girl: Compromised Royal, Prince Andrew, Welcomes New Grandchild
11:52 GMTElection Commission: United Russia Ahead With 49.82% in Parliamentary Vote as 99% of Ballots Counted
11:49 GMTUK Crisis: Why Are Gas Prices Surging, Leading To Massive Spike In Cost Of Energy To British Homes?
11:30 GMTPoland to Boost Defence on Border With Belarus by 500 More Troops
11:24 GMTOne Person Killed, Four Injured in Freight Trains Collision in Guinea, Reports Say - Photos
11:23 GMTIran Dismisses NYT’s Account of Mossad Assassination of Nuclear Scientist as Just ‘Newspaper Report’
11:20 GMTLabour MP Seeks Party Position Clarity Over Transgender Issues Amid Online Threats
11:16 GMTKosovo Bars Serbian-Registered Vehicles From Entering
11:15 GMTBoris Johnson to Face-Off with Amazon Founder Jeff Bezos Over E-Commerce Giant’s Low UK Tax Payments
11:04 GMTAll About Decision Making: PSG's Pochettino Explains Why He Substituted Messi During Match With Lyon
11:02 GMTIndia: 19-Party Alliance Begin Countrywide Protests Against Narendra Modi Government
10:51 GMTFormer UK Prime Minister Urges Rich Nations to Send COVID-19 Vaccines to Poor Countries
10:40 GMTAlia Bhatt's New Ad Stirs Uproar for Painting Hindu Ritual 'Kanyadaan' as 'Regressive'
10:36 GMTNorth Korea Calls AUKUS Submarine Deal 'Dangerous Act' Fueling Arms Race
10:16 GMTHotel Rwanda Hero Convicted of Terrorism Charges After Being 'Kidnapped' From Dubai
10:08 GMTBoeing Begins Probe After Empty Tequila Bottles Found Aboard Air Force One Plane Under Construction
09:59 GMTCristiano Ronaldo Reacts to Manchester United's Win Over West Ham: 'Let's Go, Devils!'