Why Iran's Abandoning Its Nuclear Deal Would Play Into Washington's Hands 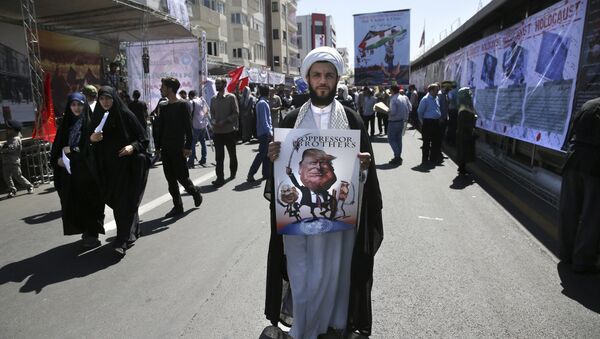 Tehran needs to stick to the Iran nuclear deal and urge the parties involved to do the same in accordance with the Joint Comprehensive Plan of Action (JCPOA), Tariq Rauf, an expert on nuclear disarmament, told Sputnik, adding that Iran's withdrawal from the agreement will play directly into the US’ hands.

Iranian President Hassan Rouhani's warning that Tehran could abandon the nuclear deal it reached with the P5+1 powers if the US continues to impose sanctions on Iran has prompted serious concerns among observers.

"If America wants to go back to the experience [of imposing sanctions], Iran would certainly return in a short time — not a week or a month but within hours — to conditions more advanced than before the start of negotiations," Rouhani told Iran's parliament Tuesday as quoted by Reuters.

Speaking to Radio Sputnik, Tariq Rauf, former head of Verification and Security Policy Coordination at the International Atomic Energy Agency (IAEA), explained why Iran's potential withdrawal from the deal would pose a risk to the country.

"I think that the recent ultimatum or threat by Iran to break out of the Joint Comprehensive Plan of Action (JCPOA) and resume full scale uranium enrichment or other related nuclear activities that are restricted under the so-called Iran deal is not only a mistake but risks playing into the US' tactics of pushing Iran to break out of this agreement," Rauf emphasized.

According to the expert, "such action would isolate Iran and would also lead to the loss of support from the other partners like Russia, France, Germany, China and the UK and EU."

Rauf called attention to the fact that at the moment Iran has widespread international support due to its compliance with the provisions of the nuclear deal.

However, if Tehran withdraws from the agreement it will be blamed for ruining the deal and so will not emerge as the winner, the expert warned.

While the White House continues its crackdown against Iran by imposing sanctions on the country due to its current missile program, no one, even in Washington, can deny the fact that Tehran has been complying with the deal since it was concluded.

Despite Tough Rhetoric, 'No One is Interested in Ripping Up Iran Nuclear Deal'
What's behind the Trump administration's belligerent stance toward Tehran?

"Many conservatives and so-called right-wing elements in the US were firmly opposed to the Obama administration's policy of a negotiated nuclear deal with Iran," Rauf responded, "These opponents believe that 'crippling sanctions' were working and it was only a matter of time before Iran would capitulate."

"These opponents believe that the reimposition of sanctions will bring Iran to its knees. They mistakenly believe that $150 billion of Iran monies confiscated by the US and released under the Iran deal is an American reward to Iran," he stressed adding that this anti-Iran lobby is "grossly misinformed" and "deeply ideological in their feeling with Iran on this issue."

The expert warned against "unnecessary statements" referring to Tehran's accusations of Donald Trump being "not a reliable partner."

"I think that such statements are not helpful and play into the game of the US administration," Rauf said, reiterating that Iran, first and foremost, should stick to the nuclear deal.

However, assessing Trump's Iran policy the expert labelled the US administration's attempts to undermine the nuclear agreement as "immature."

"Dismantling the Iran nuclear deal without due cause or driven by ideological consideration reflects immaturity of leadership and a lack of understanding of the international security landscape," Rauf stressed.

"The Iran nuclear deal was endorsed by the [UN] Security Council Resolution 2231 and thus has international legitimacy and legal standing that bilateral or multilateral defense arrangements — whether or not underpinned by nuclear weapons — clearly do not have," the expert highlighted.

According to Dzhabarov, the international community should do whatever it takes to preserve the Iran nuclear deal.

"This is an absolutely real threat," Dzhabarov believes, "If Iran withdraws from this agreement, there will immediately be a hotbed of tensions in the Middle East."

For his part, Russian Senator Igor Morozov, a member of the Federation Council's foreign affairs committee suggested that Moscow could convene a meeting with the United States, China, France, the United Kingdom and Germany to address the problem.

"Russia may demand the 'six' — thanks to whose efforts this agreement was reached — to convene, and to demand the US not to disrupt efforts to stabilize the situation," Morozov told Sputnik, adding that Iran's reaction to the expansion of US sanctions against Tehran was reasonable and perfectly understandable.