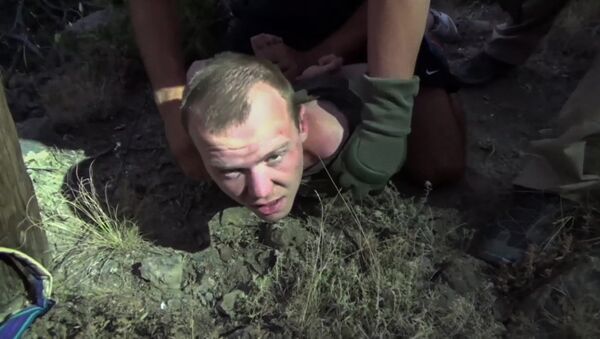 A Ukrainian agent detained in Crimea has admitted guilt in plotting acts of sabotage on the Russian peninsula on the orders of Ukrainian intelligence, the Russian Federal Security Service (FSB) footage of his confession revealed on Tuesday.

MOSCOW (Sputnik) — Gennadiy Limeshko was detained on Saturday, August 12, while attempting to damage power lines near the Sudak-Novy Svet highway in southern Crimea, the FSB said earlier in the day. Limeshko, a senior reconnaissance scout with the Ukrainian military, is also suspected of planning to spark forest fires and cause rockfall in the same region.

"I received 5,000 [$195] hryvnia for the task. On August 12, after an attempt to place a charge, I was detained by the Russian FSB officers," Limeshko is heard saying in the released footage.

Limeshko said he had met his handler, named Andriy and possibly known otherwise as Arthur Narimanovych, in the southern Ukrainian city of Kherson on June 2. He said his tasks were to damage power lines between the towns of Sudak and Novy Svet in Crimea, to damage a road by causing rockfall, as well as to spark a forest fire along the southern coast of Crimea.

According to Limeshko, since 2015 he has been trained as part of a special operations team exercising physical and marksmanship training, as well as skills necessary to carry out an explosion.

US Starts Building 'Maritime Operations Center' in Ukraine, Here's Why
The Ukrainian agent added that the group was expected to carry out sabotage attacks in Crimea, as well as against the self-proclaimed Donetsk People’s Republic.

At the same time the Security Service of Ukraine (SBU) said in a statement that the detention of the agent was a provocation carried out by the FSB.

"Russia's FSB has conducted yet another provocation, reporting about a detention of an alleged SBU agent in Crimea," the statement said.

This is not the first time, when Russian security agencies detain Ukrainian agents planning to carry out acts of sabotage in Crimea. In December, Sergei Aksyonov, the governor of Russia's Republic of Crimea, said that during 2016, thirteen attacks were prevented by local authorities, with the detainment of Ukrainian sabotage groups being the most resonant of these cases.