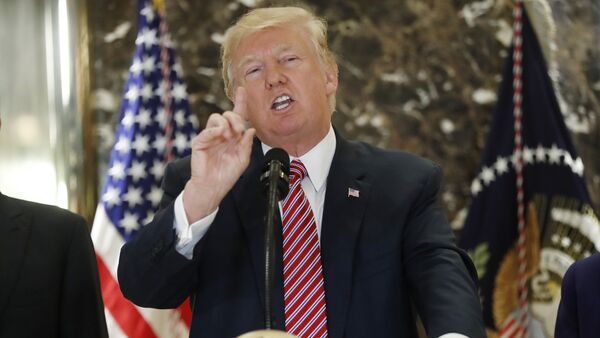 In a bizarre Tuesday press conference, US President Donald Trump condemned violence by "both sides": white supremacists and neo-Nazis, and the so-called "alt-left."

The alt-left, a play on the term alt-right used in some contexts to explain Trump's rise, bears responsibility for some of the violence at the campus of the University Virginia in Charlottesville, Virginia that took place over the weekend, Trump said on Tuesday. "What about the alt-left that came charging at the alt-right. Do they have any semblance of guilt?" the president asked.

"You had troublemakers. You see them come with the black outfits, and the helmets, and the baseball bats… you got a lot of bad people in the other group too."

"Nobody wants to say that," Trump emphasized.

When pressed on why he was slow to condemn the violence, Trump stated "before I make a statement, I need the facts…it's a very important process to me."

But on Trump's account, there were good guys on both sides of the violence too. According to Trump, there were "very fine people on both sides," even though the white nationalist party was chanting "Jews won't replace us."  "There were a lot of people in that [Unite the Right] group that were there to innocently protest and very legally protest… they had a permit," Trump said, adding "the other group didn't have a permit."

As of Tuesday, at least three CEOs quit the White House Manufacturing Jobs Initiative out of embarrassment of being affiliated with Trump, as well as the president of the Alliance of American Manufacturing.