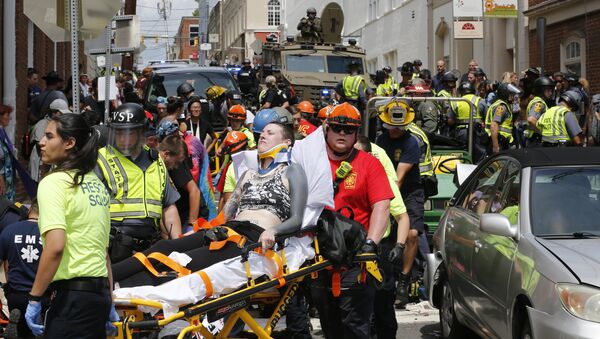 © AP Photo / Steve Helber
Subscribe
A Massachusetts police officer mocked the death of one and the injuries of 19 during a car attack by a suspected white supremacist in Charlottesville, Virginia, on Saturday. He has apologized for his “stupid” comment and is now under investigation.

The presumably-conservative followers of Shapiro's page reacted with shock and derision: "Are you serious? A person DIED. 19 other people were injured, some badly. You 'love' this?" one commenter wrote. "How many times has a car plowed into you, Conrad?"

German Chancellor Condemns Violence in US City of Charlottesville

"Actually, I've been hit by ashitbag [sic] with warrants but who cares right you ignorant brat live in fantasy land with the rest of America while I deal With the real danger," Lariviere replied to the latter comment.

Seemingly reacting to a deleted comment earlier on the thread, Lariviere wrote: "How do you know [the culprit] was a nazi scumbag? Stop being part of the problem."

Lariviere has come under investigation by his employer, the Springfield Police Department. Commissioner John Barbieri issued an email statement to the press about the officer's comments: "I received notification of this Facebook post earlier today via email from a complainant. The post is purportedly from Springfield police officer. I took immediate steps to initiate a prompt and thorough internal investigation."

Trump Once Again Urged to 'Be Clear and Condemn' Charlottesville Violence

"If in fact this post did originate from an officer employed with the Springfield Police Department, this matter will be reviewed by the Community Police Hearings Board for further action."

Domenic Sarno, the Democratic mayor of Springfield, Massachusetts, openly condemned Lariviere's online comments. "I just got done issuing a statement this morning on how upsetting the tragic incidents were in Charlottesville, Virginia, and one of our own officers does this? Unbelievable! There is no place for this in our society, let alone from a Springfield Police Officer," Sarno said. "I stand by and commend Commissioner John Barbieri's steps for a thorough internal investigation and review by our Community Police Hearing Board to pursue the appropriate discipline against said officer."

During a Sunday interview with MassLive, a penitent Lariviere backtracked on his comments. "Never would I want someone to get murdered. I am not a racist and don't believe in what any of those protesters are doing," Lariviere said. "I'm a good man who made a stupid comment and would just like to be left alone."

The video in question showed a gray Dodge Charger speed into a group of protesters, making no sign of braking. The driver then reversed his vehicle and drove away. Heather Heyer, a 32-year-old Charlottesville paralegal who was among the left-wing counter-protesters, was killed in the crash while 19 others were injured.

Twenty-year-old James Alex Fields Jr. was arrested and charged with second degree murder as the alleged driver of the Charger. Fields, who was once photographed holding a shield bearing the symbol of fascist  group Vanguard America, has been denied bail. Vanguard America admits that Fields attended one of their protests, but denied his membership.

Earlier in 2017, several states such as North Dakota considered relaxing penalties for drivers who hit protesters with their cars. None of these bills made it into law, either being shelved or dying in the state legislature.