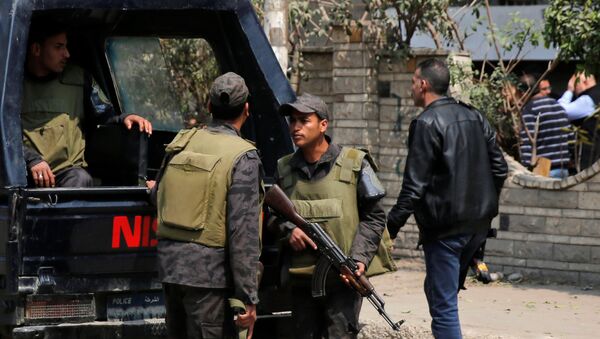 Egyptian security forces abuse their power by abducting people over unlawful charges and mistreating them in custody, a major human rights watchdog said Monday, attributing the situation to the legacy left by the 2013 mass killings of ousted President Mohammed Morsi's supporters in Cairo.

MOSCOW (Sputnik) — According to the human rights activists, the brutal dispersal of mass protests in Cairo's Rabaa al-Adawiya square in 2013 marked the critical moment when the Egyptian police started to plunge into unlawfulness and extrajudicial executions.

“Not a single person has been held to account for the events on 14 August 2013, widely known as the Rabaa massacre. Instead, hundreds who attended the protests, including journalists and photographers who were covering the events, have been arrested and are facing an unfair mass trial. This vacuum of justice has allowed security forces to commit serious human rights violations, including using excessive lethal force and carrying out enforced disappearances, entirely unchecked,” Amnesty International said.

Egypt's Court Upholds Death Penalty for 28 People Over Killing of Top Prosecutor
Since 2015, Egyptian police officers have staged disappearances of at least 1,700 people over unjustified charges connected to the 2013 protests, with those arrested cut off from their families and legal protection, the watchdog said.

According to Amnesty International, the Egyptian judicial system has unlawfully convicted thousands of people over protest-related accusations, while hundreds of Egyptians were sentenced to death over dubious evidence.

The human rights watchdog also claimed that the international community turns a blind eye to what appears to be mass purges in Egypt.

In July 2013, amid the wave of public discontent over Muslim Brotherhood (a terrorist organization outlawed in Russia) rule, the Egyptian army ousted Morsi and declared a transition period in the country. Morsi supporters staged mass protests, demanding his reinstatement. Hundreds of Egyptians were killed in the subsequent riots and clashes, including the so-called Rabaa massacre, when at least 813 people were killed in a brutal dispersal of a pro-Morsi sit-in in Cairo.

On May 26-28, 2014, an early presidential election took place in Egypt, which was won by former Defense Minister Abdel Fattah Sisi.