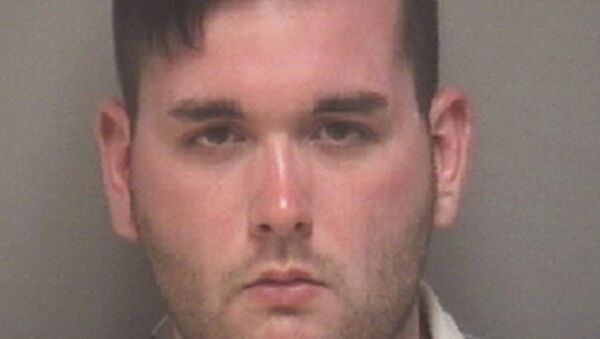 Twenty-year-old James Alex Fields Jr. of Ohio was charged with second-degree murder after he plowed a Dodge Challenger through a crowd of peaceful marchers in Charlottesville, Virginia.

The anti-racist protestors were speaking out against the white supremacist rally that took place in Charlottesville this past weekend over the removal of a Confederate statue.

Fields drove his Dodge at high speed into a sedan, which then hit a minivan. The crash left 32-year-old Heather Heyer dead and at least 19 other people injured. Fields, who is currently being held without bail, escaped the scene of the accident but was eventually tracked down by police.

According to Fields' former high school teacher, Derek Weimer, the student stood out in ninth grade for his "deeply held, radical" beliefs on race. The white supremacist was spellbound by Nazism and Adolf Hitler and his ideologies were singled out during his time at Randall K. Cooper high school in Union, Kentucky.

"Once you talked to James for a while, you would start to see that sympathy towards Nazism, that idolization of Hitler, that belief in white supremacy," Weimer said in an interview with the Associated Press, adding that, "It would start to creep out… He was very misguided and disillusioned."

"I felt it my mission to explain how vile the Nazis were," the teacher explained, expressing that his initial gut feeling upon hearing about Fields was that he had failed as an educator. According to the educator, Fields had also confided that he was schizophrenic and was prescribed anti-psychotic medications.

Fields wanted to join the army during his senior year of high school. Being a former officer in the Ohio National Guard himself, Weimer tried to provide Fields with guidance regarding the application process. The teacher was surprised to hear that Fields had enlisted in the army, and Fields was very disappointed when he was eventually turned down.

Army spokeswoman Lt. Col. Jennifer Johnson confirmed that "James Alex Fields reported for basic military training in August of 2015. He was, however, released from active duty due to a failure to meet training standards in December of 2015," reported NBC San Diego.

According to the Blade, Mike Wilson, principal of Randall K. Cooper High School, also reiterated that Field was "quiet and reserved." In an email, Wilson wrote, "Hatred and violence is never a viable solution to any problem. As educators, we are always using teachable moments and providing guidance to students to make good and sound choices."

Hours before the crash, Fields was photographed carrying a Vanguard America sign and wearing the white supremacist organization's uniform. However, the group tweeted on Sunday that they are not affiliated with the suspect.

"The driver of the vehicle that hit counter protesters today was in no way a member of Vanguard America," the group said. "All our members had been safely evacuated by the time of the incident. The shields seen do not denote membership, not does the white shirt. The shirts were freely handed out to anyone in attendance."

In an interview with the Associated Press, the suspect's mother, Samantha Lea Bloom, said that she didn't know the extent of her son's convictions. She was aware that her son was attending a rally in Virginia but just thought that it had "something to do with Trump."

"I just told him to be careful," she said, and "to make sure he's doing it peacefully."

After being criticized for his initial response after the protest in Charlottesville, US President Donald Trump spoke on national television today condemning the KKK, neo-Nazis and white supremacists, calling them "criminals and thugs."

"We condemn in the strongest possible terms with egregious display of hatred, bigotry and violence. It has no place in America… racism is evil," Trump added.