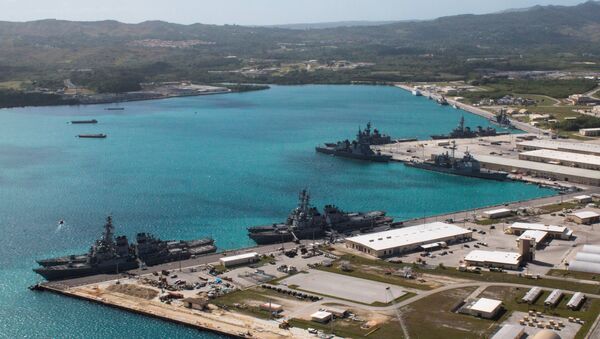 Donald Trump expressed his support for Guam and told Guam Governor Eddie Calvo that “tourism would surge” amid concerns that North Korea could strike the US island, according to a recording of the Friday call the governor posted to Facebook.

"Eddie, I have to tell you you've become extremely famous," Trump told the Guam governor. "All over the world they're talking about Guam and they're talking about you and I think tourism – I can say this, your tourism, you're going to go up like ten fold with the expenditure of no money. So I congratulate you."

In response to that, Calvo said, "As the governor of Guam representing the people of Guam, and as an American citizen, I have never felt more safe or so confident with you at the helm."

Despite the exchange of pleasantries between the two leaders, social media users did not quite get Trump’s joke and an online storm broke out with Twitter users criticizing the president’s joke (or not a joke?).

"Everyone knows the best way to become famous is to become a nuclear target!" — Trump to Guam. #saturdaymorning pic.twitter.com/ACGM5T3hHS

​Now Trump calls Guam's Governor to congratulate him on becoming famous because of North Korea. Sick obsession with notoriety. Unfit.

BREAKING: Trump calls #Guam Governor amid crisis, and congratulates him for becoming 'famous' making Kim Jong-un the normal one

Guam is facing a real threat from NK & Trump calls the Governor of Guam to joke about how famous he is. He's an idiot! #LastWord #Impeach

Omfg Trump's call to Guam "you are famous…" its like watching a terrible person roleplay as a president… This is not normal!

​However, one thing can’t be denied and that is the fact that there has actually been an influx of tourists to Guam recently.

Vicious Circle: How to Prevent 'Guam Missile Crisis' Between US, N Korea
The US island in the Pacific has received over 132,000 visitors in July, breaking a 20-year record.

According to online publication Travel Gazette, South Korean tourist arrivals recorded a 25 percent increase; US mainland visitor arrivals were up 14.9 percent over the last year.

“Arrivals from Russia increased by 57 percent and from Europe by 13 percent, among others. However, Guam’s number one visitor market, Japan, experienced a decline of 5.2 percent in visitor arrivals in July because of airline companies’ lack of seating capacity,” the publication wrote.

#DYK The economy of the #Guam is supported by tourism and the #USAF #Maps #Geography #World #Travel @mapsofworld https://t.co/UzdgJXPEIp pic.twitter.com/bjtu97NVIh

According to Agence France-Presse (AFP), Guam, whose economy is based largely on income from tourism, wants to benefit from the threats of the DPRK and attract tourists.

"The circumstances are unfortunate but this is a good opportunity for us to educate the world about Guam and our culture, about where we are, and who we are," Josh Tyquiengco, marketing director at Guam Visitors Bureau, the official agency for the island, told AFP.

Island of Guam With US Base Possible Target of N. Korean Strike
"Guam is more than a military base. We are a safe family destination. We reassure potential visitors that we continue to be a safe… place to visit," he said.

Hence, this shows that once again Trump’s words were either taken out of context or misunderstood by the public.

Earlier, the state-run Korean Central News Agency (KCNA) released a report, which stated that Pyongyang has a plan to launch four intermediate-range missiles at the US territory of Guam, where American military bases are located.