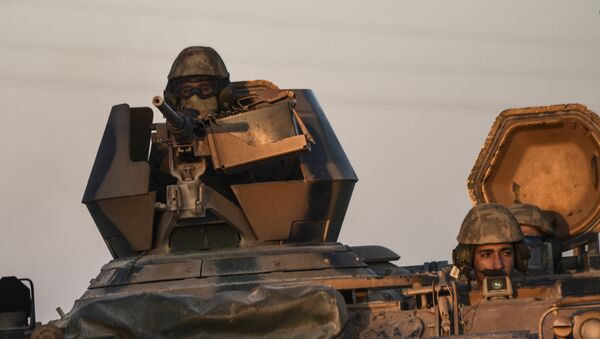 Turkey is likely to resume its Euphrates Shield military operation in Syria, according to Yuri Mavashev, a senior political researcher at the Center for Modern Turkish Studies.

"The signals sent by Turkish high-ranking officials, including President [Recep Tayyip] Erdogan, as well as some analytical reports indicate that Turkey may be considering the resumption of the operation started a year ago," Mavashev said at a conference in Moscow.

The campaign was the first incursion of the Turkish military in Syria. The operation was criticized by the Syrian Kurds and Damascus, who accused Ankara of violating Syria’s territorial integrity.

Battle for Idlib: How Damascus Could Benefit From Jihadi Takeover
After Jarabulus was retaken, the offensive continued to the southwest. In the end of February, chief of the Turkish General Staff, Hulusi Akar said that control was taken over the city of al-Bab and the goals of the Euphrates Shield operation in Syria had been achieved. The campaign ended on March 29.

According to the expert, despite the fact that Turkish forces took control over a certain territory in northern Syria, Ankara is not comfortable with its current status since "it lacks strategic initiative."

Mavashev pointed out that Turkey is now concerned over the situation in the Syrian province of Idlib.

"The situation in Idlib has changed. Turkey relied on the Ahrar-al-Sham group there, but it lost control over the region. Now Idlib is under the control of Tahrir al Sham, a merger group between al-Nusra Front and some other radical groups," Mavashev said.

Turkey Restricts Border Crossing With Syria Due to Terrorist Threat - Minister
Ankara signaled that a new military operation might be in consideration for northern Syria. Earlier this week, Prime Minister Yildirim said that Ankara is taking all the "necessary measures" along the border with Idlib. He stressed that Turkey would defend its national interests, namely its right to sovereignty and security, if needed.

According to Mavashev, Idlib is going to be the "next target" for a Turkish military offensive.

"However, there is one problematic point. Turkey wants to strengthen the positions of its allied groups in Idlib because Ankara doesn’t want the region to be controlled by Damascus. But the international community may stand against such a plan. Turkey knows that if they launch a military operation now it will have big consequences. As an option, Turkey may discuss its stance on Idlib at the Astana talks and coordinate it with Russia," the expert suggested.