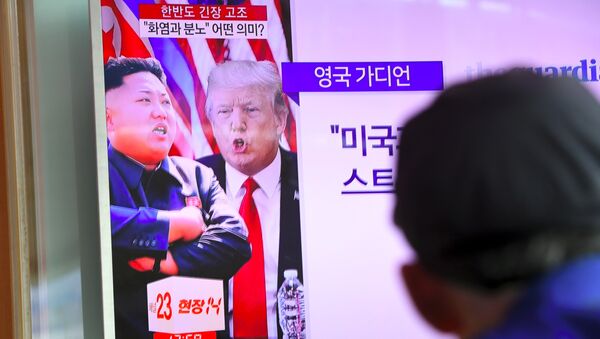 © AFP 2023 / JUNG Yeon-Je
Subscribe
International
India
Africa
Commenting on the stepping up of warmongering rhetoric between the United States and North Korea, Russian Foreign Minister Sergei Lavrov said that the risk of a full-fledged war between Washington and Pyongyang is "very high," warning, however, against whipping up hysteria.

"The risks are very high, especially regarding the rhetoric [between the two countries]. We hear direct threats to use force. … Of course, this concerns us very much," Lavrov said Friday.

At the same time, the Russian top diplomat expressed hope that common sense will prevail in the situation. He underscored that the first step to defuse the tensions "should be taken by the stronger, smarter side."

Lavrov added that Russia and China have "a whole range of proposals aimed at preventing the deepest conflict, a crisis with a huge number of human losses."

Asia
Poll Shows Majority of Americans Believe US 'Will Soon Be at War With N Korea'
Meanwhile, mainstream media continues to hype up frenzy over the North Korean problem. For example, British tabloid The Sun recently published a list of expert recommendations in preparation for a nuclear war. Moreover, Fox News reported on a surge in sales of bunker equipment in the US.

Nikolai Topornin, associate professor at the Moscow State Institute of International Relations (MGIMO University), suggested that certain commercial interests may be behind the scaremongering at play in the media.

"Possibly, this is being made in commercial interests and it is no surprise. The US and North Korea have exchanged a series of very stern warnings. Of course, people get scared and it is normal if some of them consider buying bunker equipment, for example," Topornin said in an interview with Radio Sputnik.

At the same time, according to the expert, there have also been objective reasons for such hysterical publications.

"US media recently reported that the US military has a plan of conducting pinpoint strikes on North Korean nuclear-related facilities. Of course, it is clear that a full-fledged nuclear war can be ruled out. But the risk of a non-nuclear conflict remains, especially taking into account the war of words between Washington and Pyongyang. Needless to say, the US-North Korea standoff is currently at its hot phase," Topornin pointed out.

Vicious Circle: How to Prevent 'Guam Missile Crisis' Between US, N Korea
Tensions on the Korean Peninsula have recently intensified due to North Korea's multiple nuclear tests and ballistic missile launches conducted in violation of UN Security Council resolutions; last month, Pyongyang is belived to have conducted two tests of intercontinental ballistic missiles.

US President Donald Trump said that North Korea "will be met with fire and fury" if Pyongyang does not reign in its "threats to the US."

On Thursday, Trump told reporters, "Let's see what he [North Korean leader Kim Jong-un] does with Guam. He does something in Guam, it will be an event the likes of which nobody’s seen before what will happen in North Korea."

​Russia has repeatedly voiced concern over the escalation on the Korean peninsula. During Chinese President Xi Jinping's visit to Moscow earlier this summer, the Russian and Chinese foreign ministries issued a joint statement proposing ways to de-escalate the situation. Moscow and Beijing called on Pyongyang to stop nuclear tests and urged Washington and Seoul to refrain from conducting joint drills.