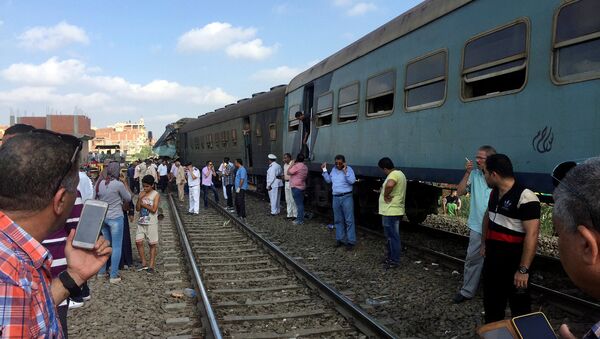 At least 36 died and some 120 others were injured on Friday when two trains collided in the suburbs of the Egyptian city of Alexandria, local media reported citing medical and security sources.

The previous death toll stood at 28 people killed and 74 others injured.

According to the Youm7 portal, 22 injured people have been hospitalized in local clinics, while the exact number of casualties is being determined.

Egypt Prosecutor General Nabil Sadeq has ordered an urgent investigation into the collision between, the news outlet added.

A train crash in Alexandria, Egypt has led to multiple deaths and injuries. Reports of more than 20 killed and dozens injured. pic.twitter.com/l5BLKvngxI

According to local authorities, a mistake by the operator of a semaphore caused the accident.

As a result of the collision, several cars derailed and overturned.

There were no Russian nationals among the victims of the deadly two-train collision in the suburbs of the Egyptian city of Alexandria on Friday, the Russian embassy in Cairo told Sputnik.

"According to the information we have now, Russian citizens have not been harmed in this accident," an embassy official said.

There have been a number of mass casualty train accidents in Egypt in recent years mainly due to the poor condition of transport infrastructure. In 2013, a train derailment in Giza killed 19 people, while in 2012, a train collision with a school bus in the city of Manfalut killed 51 people, mostly children.

According to World Health Organization, Egypt annually losses about 12,000 lives due to road traffic crashes.