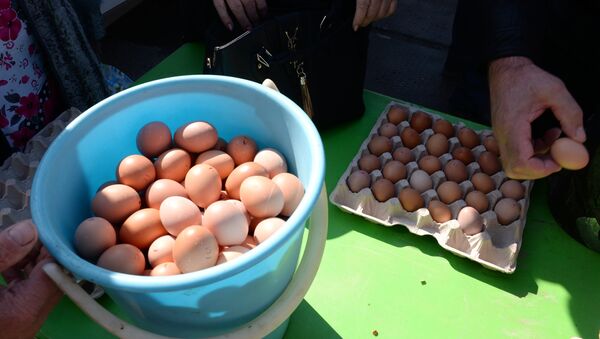 According to a spokeswoman of the Russian food safety watchdog, contaminated chicken eggs produced in the European Union could not have been imported to Russia.

MOSCOW (Sputnik) — Fipronil-contaminated chicken eggs produced in the European Union could not have been imported to Russia, as the country's market is fully supplied by domestic farmers and EU producers have no market access in Russia, the country's food safety watchdog Rosselkhoznadzor spokeswoman Yulia Melano told Sputnik Friday.

"Eggs from the European Union don't have access to the Russian market, due to the absence of [EU] producers authorized for exporting [eggs] to Russia. The ban on egg imports has nothing to do with the food embargo, the situation used to be the same before," Melano said.

She added that Russia did not authorize EU agricultural companies to sell eggs to the country as market demand for the product is fully met by domestic farmers.

"It is slightly possible that such eggs can enter the country through the EAEU [Eurasian Economic Union], but we have never encountered attempts to illegally import such products on the borders with Kazakhstan and Belarus," Melano said.

Belgian Poultry Farms Lost Over $10Mln in Contaminated Eggs Scandal
Several EU nations, including Germany, the United Kingdom and Belgium, have recalled millions of Netherlands-produced eggs from the market over the past few days after it was revealed that some of them could be potentially contaminated with insecticide fipronil. The substance is used for treating lice, fleas and ticks. In large quantities fipronil can cause liver, kidney and thyroid gland damage.
Newsfeed
0
Access to the chat has been blocked for violating the rules . You will be able to participate again through:∞. If you do not agree with the blocking, please use the feedback form
The discussion is closed. You can participate in the discussion within 24 hours after the publication of the article.
To participate in the discussion
log in or register
loader
Chats
Заголовок открываемого материала