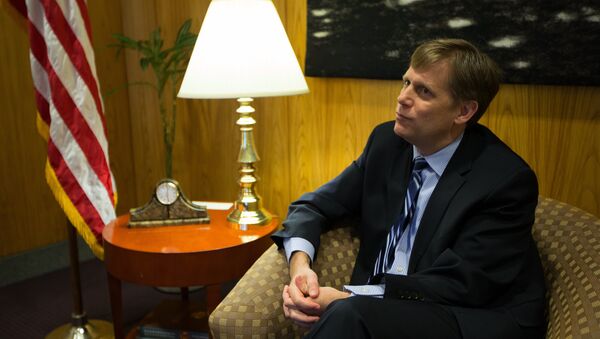 Former US Ambassador to Russia Michael McFaul harshly criticized US President Donald Trump on Friday for his remarks about Russia's recent expulsion of US diplomats, since instead of retaliating, Trump said he was grateful to the Russian leader for helping the United States save money.

MOSCOW (Sputnik) — On Thursday, Trump expressed his gratitude toward Russian President Vladimir Putin for expelling 755 US diplomats from Russia, since the decision would help the US government save money in the salary budget.

When Obama kicked out 35 Russian diplomats, Putin —a "strong" leader admired by Trump — retaliated. In response, Trump did nothing. Weak.

​In a follow-up tweet, the former ambassador asked why Trump, taking into account his "admiration" for Putin, did not act in a similar manner of his counterpart by responding to Russia's move.

But if Trump admires Putin, why doesnt he act like him? Putin didnt roll over when we kicked out 35 of his, but Trump did in response to 755 https://t.co/H2ukTO8cGJ

​In December 2016, then US President Barack Obama expelled 35 Russian diplomats and banned Russia from accessing two of its diplomatic compounds. The decision came as a response to Russia’s alleged interference in the US election, which Moscow has repeatedly denied.

In late July, Moscow announced that the diplomatic presence of the United States in Russia would be cut by 755 people to 455, the same number of diplomatic personnel that Russia currently has in the United States. The Kremlin said it was a response to the 2016 ouster of 35 Russian diplomats and sanctions passed by the US Congress in July.