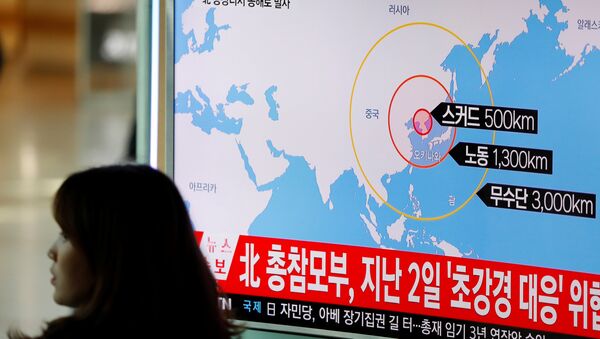 Russian Foreign Minister Sergei Lavrov said that risks of conflict between the US and North Korea turning into a full-fledged war are high, this would involve a huge number of victims.

"The risks are very high, especially regarding the rhetoric [between the two countries]. We hear direct threats to use force. At the same time, US Secretary of Defense Mattis stated once again: Yes, this will involve a huge number of human casualties, and yet talks about a pre-emptive strike on North Korea, talks in Pyongyang, that it is necessary to strike the island of Guam, where several US military bases are located, do not stop," Lavrov said.

"Of course, this concerns us very much," Lavrov said at a forum, adding that when it almost comes to a fight "the first step away from danger should be taken by the stronger, smarter side."

The Russian top diplomat also said that Moscow is hoping that common sense will prevail in the situation around North Korea despite escalated rhetoric on part of both Pyongyang and Washington.

"Unfortunately, the rhetoric in Washington and Pyongyang is beginning to turn extreme. We are still expecting common sense to prevail," Lavrov said at a youth forum in Russia's Vladimir region.

Washington Needs to Show 'US Not Seeking to Attack North Korea'
Russia has repeatedly voiced concern over the escalation on the Korean peninsula. During Chinese President Xi Jinping's visit to Moscow earlier this summer, the Russian and Chinese foreign ministries issued a joint statement proposing ways to de-escalate the situation. Moscow and Beijing called on Pyongyang to stop nuclear tests and urged Washington and Seoul to refrain from conducting joint drills.

At the same time, Sergei Lavrov stated, that Russia will not accept North Korea being in possession of nuclear weapons.

North Korea said on Wednesday that it was considering a missile attack near the US island of Guam, which hosts several US military bases after President Donald Trump threatened Pyongyang with "fire and fury" over its recurring missile tests.

Tensions in the region have recently intensified due to North Korea's multiple nuclear tests and ballistic missile launches conducted in violation of UN Security Council resolutions. Last month, Pyongyang conducted two tests of intercontinental ballistic missiles. According to the Korean Central News Agency, the latest launch on July 28 was successful, and the missile reached the altitude of 3,725 kilometers and traveled 998 kilometers, for about 47 minutes, before falling into the Sea of Japan.