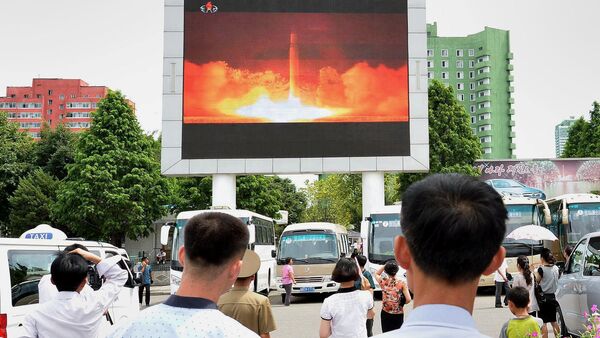 DVORIKI (Sputnik) – The Russian foreign minister said that Russia and China had "a whole range of proposals aimed at preventing the deepest conflict, a crisis with a huge number of human losses."

"The Democratic People's Republic of Korea signed this agreement [on non-proliferation of nuclear weapons], then exited it, and now says it has all legal rights to create nuclear weapons, it has created them already. But we know our stance — we will not accept a nuclear North Korea which has nuclear weapons," Lavrov said, speaking at a forum, on the North Korean escalation and the risk of Washington-Pyongyang conflict turning into a war.

Risks of N Korea-US Conflict Turning Into War are High - Lavrov
Russia has repeatedly voiced concern over the escalation on the Korean peninsula. During Chinese President Xi Jinping's visit to Moscow earlier this summer, the Russian and Chinese foreign ministries issued a joint statement proposing ways to de-escalate the situation. Moscow and Beijing called on Pyongyang to stop nuclear tests and urged Washington and Seoul to refrain from conducting joint drills.