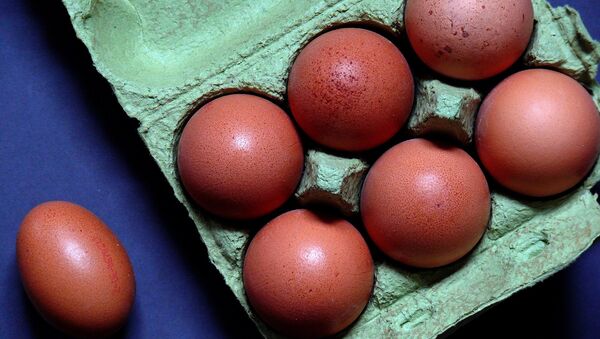 Eggs contaminated with hazardous insecticide fipronil have been detected in 15 European Union member states, as well as in Switzerland and Hong Kong, European Commission's spokesman for trade and agriculture Daniel Rosario said Friday.

MOSCOW (Sputnik) — Millions of chicken eggs have been recalled in past weeks from shelves in European stores over fears that they might have been contaminated with fipronil.

"Countries, in which farms are blocked after being identified to have received treatment with product containing fipronil, are Belgium, the Netherlands, Germany and France, and countries that have received contaminated products from the countries I just mentioned are Sweden, France, the United Kingdom, Austria, Ireland, Italy, Luxembourg, Poland, Romania, Slovakia, Slovenia and Denmark. As I mentioned, there are two non-EU entities that are also part of the rapid alert system like Switzerland and also Hong Kong, who detected these contaminated products," Rosario said at a press briefing.

Eleven European States Recall Eggs From Stores Amid Contamination Scandal
Earlier in the day, the European Commission said it would call a ministerial meeting on September 26 amid the ongoing scandal around fipronil-contaminated eggs.

On Thursday, Dutch police arrested two suspects in the Netherlands as part of an investigation into start of the contamination with fipronil in the poultry industry.

Belgian media reported on Tuesday that the country's Agriculture Minister Denis Ducarme accused Dutch authorities of failing to warn EU countries about egg contamination after it had been allegedly revealed by the country back in November 2016. The Netherlands, which is the leading producer of eggs in the European Union, has already denied the accusations.