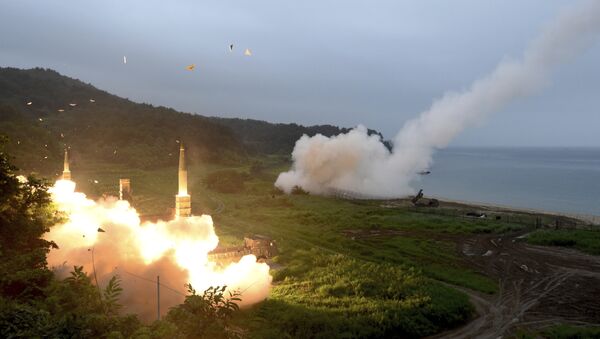 According to the German chancellor, the North Korean crisis cannot be resolved by military means.

MOSCOW (Sputnik) — The North Korean crisis cannot be resolved by military means, and the escalation of the conflict "in words" is a wrongheaded decision, German Chancellor Angela Merkel.

"I can not see the military solution," Merkel said, as quoted by the Welt newspaper.

"Germany will very intensively take part in the options for resolution that are not military, but I consider a verbal escalation to be the wrong response," she said when asked about Trump's latest tweets on North Korea.

​German Foreign Minister Sigmar Gabriel, in his turn, called on China to intensify its pressure on North Korea to avoid further escalation of the crisis on the Korean peninsula.

The minister stressed that there could be no military solution to this situation as it could have a devastating impact around the world.

"If there still is a country that has influence on the regime in Pyongyang, then it is China. It is good that China has approved the latest tightening of sanctions and intends to consistently implement them. Pyongyang has to understand that with the intensification of its aggressive, provocative policy, it actually has no partners in the world," Gabriel told the Spiegel magazine.

Pentagon Hopes for Diplomatic Solution on N. Korea, But Has Military Options
On August 5, China joined the United States, Russia and 12 other members of the UN Security Council in a unanimous vote imposing the toughest economic sanctions to date against Pyongyang.

Washington and Pyongyang have exchanged tough rhetoric over the past week. North Korea said Wednesday it was considering a missile attack near the US island of Guam, which hosts several US military bases after President Donald Trump threatened Pyongyang with "fire and fury."