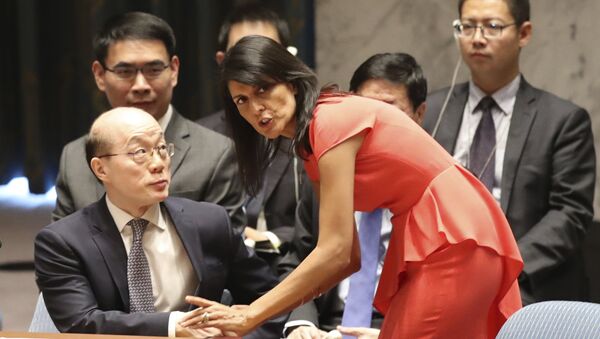 Commenting on the recent reports that the Trump administration "appears to be granting Chinese banks dealing with North Korea a temporary reprieve from threatened US sanctions" after Beijing backed UN Security Council sanctions against Pyongyang, Russian political analyst Alexander Vorontsov told Sputnik that it is an obvious example of blackmail.

On Wednesday, Reuters reported that "the Trump administration appears to be granting Chinese banks dealing with North Korea a temporary reprieve from threatened US sanctions to give Beijing time to show it is serious about enforcing new UN steps against Pyongyang."

On Saturday, the UN Security Council voted in favor of the toughest UN sanctions to have ever targeted North Korea after it tested two intercontinental ballistic missiles (ICBMs) in July.

Alexander Vorontsov, the head of the Department for Korean and Mongolian Studies at the Institute of Oriental Studies of the Russia Academy of Sciences, told Sputnik that the US employs a 'carrot and stick' policy against China and is doing so in a "very pushy manner."

"The US is also actively [considering] possible sanctions against Chinese companies working with Pyongyang as a pressure tool. It is clear blackmail," he added.

You’re ‘Hopeless’: North Korea Calls New US Sanctions a Waste of Energy
He also recalled the words of Vassily Nebenzia, Russia's Permanent Representative to the UN, who said that as per the usual practice, the US and China have been discussing the proposed resolution for a long time, however, when it was brought up for discussion, the US demanded that other members sign it as soon as possible, leaving practically no time for its consideration.

"Such an unceremonious style is a demonstration of clear disrespect to other Security Council member states. Recently the US, and it has become only more evident after Trump came to power, has been maximally pressuring China in hopes of having it exert its influence on North Korea," he told Sputnik.

The White House "has also held off on a much-anticipated trade [policy change targeting] China after Beijing backed the sanctions, although it is unclear how long President Donald Trump will delay this, given domestic pressures to make good on campaign promises to crack down on unfair trade practices," Reuters also reported.

US officials and UN diplomats told the agency that "the threat of unilateral US 'secondary sanctions' against Chinese firms with North Korean ties and trade pressure from Washington helped persuade China to drop opposition to the new UN sanctions."

World
Anti-China Sanctions: The Real US Aim in Asia, and How Beijing Can Respond
Commenting on the above statements, Wang Jinsheng, an expert at the Chinese Academy of Social Sciences, said that such an interpretation of the Chinese position does not correspond to the facts.

"China, as a large power which holds the position of the rotating chairman of the UN Security Council, bears responsibility for all its actions. Upon making a certain decision, it takes into account its traditions, geographic position and the size of its country. After the nuclear missile test in North Korea, which violated the UN resolution, China was left with no other choice but to back tough sanctions against Pyongyang," he told Sputnik.

The US, South Korea and Japan, who think that China exerts pressure on North Korea only after being pushed by the international community, always judge from their own logic, and not from the logic of cooperation, he explained.  In reality, they have to understand that China has its own reasons for pressuring Pyongyang, and those are the violation of the UNSC resolution and the threat posed to China's national security.

According to Reuters, US officials said they would be "watching China’s enforcement closely. The administration holds in reserve a list of Chinese banks and other firms the Treasury Department has been preparing to sanction for their alleged ties to North Korea’s military programs."

World
Isolated America? What if China Really Responds to Suggested US Sanctions
The Trump administration has also been preparing to launch a high-profile investigation of China for intellectual property violations. An announcement was initially planned for last Friday but was postponed, apparently after China softened its resistance to new UN sanctions, diplomats told the agency.

US officials said "Washington’s patience with China would be limited, however, and it was important to show some progress on North Korea."
"This course of action cannot be sustained indefinitely," Reuters quotes one US official as saying.

"With his approval ratings falling even with his base, Trump is trapped between the realities of dealing with China and his campaign promises to get tough on trade."

Experts suggested that there is another trap: Trump can't solve the North Korean issue on his own, without China. China however won't solve it in accordance with US demands, it is not in its national interests. Trump's campaign promises to get tough on trade with China; however, might explain his temperamental steps and sanctions' games with China. He needs a quick victory over Pyongyang.

He won't solve this issue without negotiating with North Korea. However he can't negotiate with it due to US foreign policy, and it has become yet another obstacle.

The new sanctions won't solve the problem. However they could be solved with the help of a  a Russian-Chinese initiative, which calls for the freezing of the nuclear and missile programs of North Korea in exchange for the halt of joint US-South Korean and US-Japanese military exercises. This initiative however was repelled by the US, which regarded it as a certain concession to Pyongyang, experts explained.