Germany's SPD Leader Schulz: 'Trump's Rhetoric is at the Level of North Korea's' 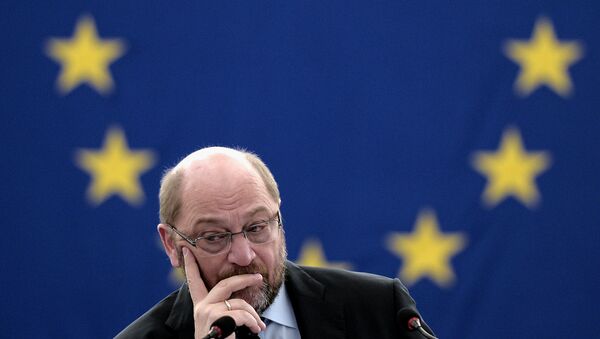 Chairman of the Social Democratic Party of Germany (SPD) Martin Schulz on Thursday urged US President Donald Trump to tone down his rhetoric toward North Korean leader Kim Jong Un in order not to escalate conflict.

MOSCOW (Sputnik) — On Saturday, North Korean leader Kim Jong Un threatened to take decisive steps against the United States, including "physical action," after the UN Security Council passed new economic sanctions against his country. Conflict heated up this week after US President Donald Trump warned North Korea it would face "fire and fury" if it did not stop making threats against Washington. Pyongyang responded by threatening to launch four ballistic missiles toward the US Pacific territory of Guam, which hosts several US military bases.

"When Trump's rhetoric is at the level of North Korea's. [He] acted like the dictator, it only exacerbated the conflict. [He] must strive for de-escalation," Schulz wrote on Twitter.

US May Use Heavy Bombers in Guam for Preemptive Strike on North Korea
In late January, SPD chose Schulz, the former European Parliament president, as a chancellor candidate and the party's chairman. According to most recent polls, Schulz's and SPD's ratings lag far behind those of incumbent Chancellor Angela Merkel and her party, the Christian Democrats (CDU).

The situation on the Korean Peninsula has become aggravated in recent months due to a series of missile launches and nuclear tests conducted by Pyongyang, all of which are claimed to be in violation of UN Security Council resolutions. Most recently, Pyongyang conducted two tests of intercontinental ballistic missiles (ICBMs) in July. On Saturday, the UN Security Council unanimously approved a resolution tightening sanctions against North Korea.