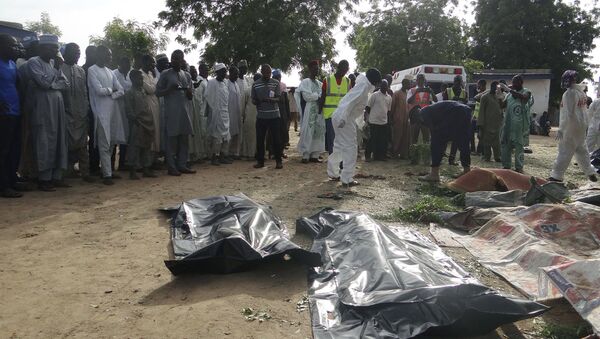 At least 56% of Boko Haram suicide bombers during the period from April 11, 2011, to June 30, 2017, were women, and at least 81 bombers were specifically identified as children or teenagers, according to the research.

MOSCOW (Sputnik) — Most of the suicide bombers of the Boko Haram terrorist group are women or children, according to the research of the Combating Terrorism Center at West Point United States Military Academy.

"Our dataset reveals that from April 11, 2011, to June 30, 2017, Boko Haram deployed 434 bombers to 247 different targets during 238 suicide-bombing attacks. At least 56% of these bombers were women, and at least 81 bombers were specifically identified as children or teenagers," the research says.

The suicide bombings by women intensified after the group abducted some 276 school-age girls from a school in the Nigerian city of Chibok in April 2014, Warner noted.

Boko Haram ‘Actively Planning’ to Kidnap Western Nationals in Nigeria
Boko Haram is a militant organization affiliated with the Islamic State terrorist group, outlawed in many countries, including Russia and the United States. It conducted large-scale attacks in northeastern Nigeria in 2009 and bombed a UN office in Abuja in 2011, killing 21 people. The organization is responsible for thousands of kidnappings in Nigeria, as well as in the neighboring African states, during the years of insurgency to establish an Islamic "caliphate" in the region.

In April 2014, Boko Haram militants kidnapped 276 Nigerian school-age girls in Chibok in the northeast of Nigeria. The group leader offered to exchange girls for all arrested militants, but the government refused. In August 2016, Boko Haram published a video with hostages, but not all schoolgirls were shown. The militants said that the other girls were killed as a result of air strikes. More than 20 of the kidnapped schoolgirls were released in October last year with the mediation of the International Committee of the Red Cross. The others fled from captivity on their own or were released. At the same time, 195 girls were listed as missing. In early May, Nigerian authorities reported that 82 schoolgirls abducted in Chibok in 2014 were released in exchange for Boko Haram militants.