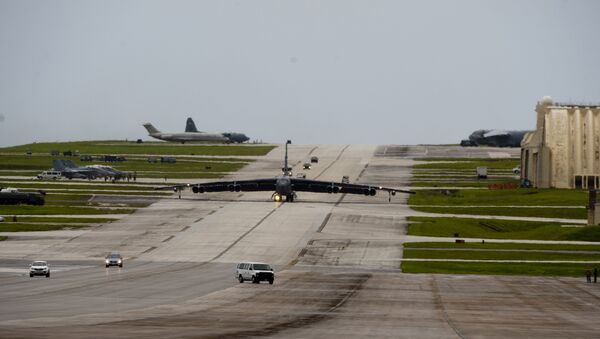 © Flickr / Naval Surface Warriors
Subscribe
International
India
Africa
North Korea is reportedly considering a missile strike on the US military base located on the island of Guam.

MOSCOW (Sputnik) – Guam is located in the western part of the Pacific Ocean and is the largest island in the Mariana Islands. The area of the island, which is of volcanic and coral origin, is about 212 square miles.

The island’s southern part is upland, while its northern part is formed by a limestone plateau.  Guam’s steep coasts are surrounded by coral reefs. There are tropical rainforests in the southern mountains and savannas in the northern part of the island.

Guam was discovered by Ferdinand Magellan during his first round-the-world journey on March 6, 1521. In 1565 the island became Spain’s colony.

World
US Leadership 'Defies Logic' With 'Preventive War' Rhetoric on North Korea
As a result of the 1898 Spanish-US war Spain ceded Guam to the United States. During the World War II Guam was the first US territory occupied by Japan in 1941.

The island was recaptured by the United States after its military operation on July 21-August 10, 1944. Until the end of the war Guam was an important US air and naval base for launching air attacks on Japan.

After the war Guam became a major strategic outpost of the US Armed Forces in the Pacific.

The island’s official status is the Territory of Guam with Hagatna being its administrative center. The population of Guam is over 162,000 people as of July 2016. A total of 37 percent of the island’s population are indigenous people called Chamorro. There are also many people of Filipino background.

The majority of people live in the northern and central parts of the island. Guam’s official language is English but Chamorro is also broadly used. About 85 percent of the religious population are Catholics.

Guam falls under the jurisdiction of US laws. Before the 1950s the local government was headed by a naval officer appointed by the US president.

Under the Guam Organic Act adopted by the US Congress and approved by the US President in 1950 Guam is ruled by the Department of the Interior (since 1973 under the jurisdiction of the Office of Insular Affairs in the same department).

The island is a self-governing territory of the United States. Its residents are US citizens, who however do not vote in the US presidential elections.

Trump: North Korea Better 'Get Their Act Together'
Guam elects one person to serve a 2-year term as a delegate to the US House of Representatives (without the right to vote).

Members of the Unicameral Legislature of Guam are elected in a single countrywide constituency by simple majority vote to serve 2-year terms.

Executive power is exercised by a governor elected for a term of four years since 1970. The Governor is appointed by the Government with the consent of the Legislature.

US military bases produce substantial revenues for Guam’s budget. They occupy one third of the island and include the Andersen Air Force Base and the Apra Harbor Naval Base among other military facilities.

The port plays a large role in the island’s economy, servicing transit ocean vessels. Guam’s port is duty free, which attracts a number of small industrial companies from Asian states.

Tourism is the bedrock of Guam’s economy. The island is visited by over a million tourists a year with 85 percent of all visitors coming from Japan. The main forms of tourism are coastal tourism, diving, board surfing and windsurfing.

There are no railroads on the islands, so cars are the main type of transport. Guam also has an international airport, from which aircraft fly to other Pacific islands, Asian countries, Hawaii (US) and the mainland United States.

Guam has textile and food enterprises and produces construction materials, primarily cement. There is also an oil processing facility on the island.