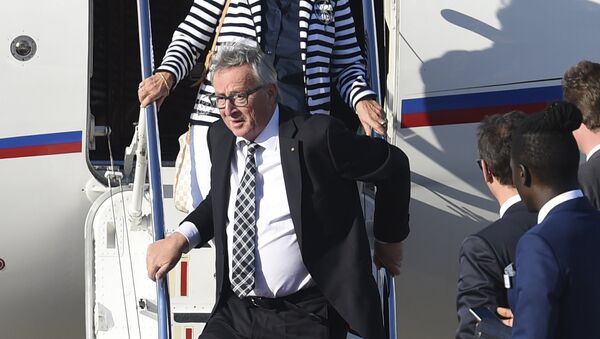 After a protracted wrangle, a campaign group has released records of the extravagant travel expenses claimed by EU officials; the controversial information should trigger a debate on how political representatives are remunerated, former Belgian parliamentarian Lode Vanoost told Radio Sputnik.

Transparency campaigners Access Info Europe managed to get access to the travel expenses claimed by EU commissioners after a three year battle which they described as "Kafkaesque." The documents show that during January and February 2016, the 28 senior officials accumulated an expenses bill of almost €500,000 ($586,632), footed by EU taxpayers.

Among the figures was a so-called "air taxi" from Brussels to Rome claimed by EU Commission President Jean-Claude Juncker, costing €26,351 ($30,938).

EU Commission spokeswoman Mina Andreeva said that the private jet was chartered to take Juncker and his entourage of eight to Rome because there was "no viable commercial plane available that would fit the president's agenda."

EU officials are allowed to claim for travel and accommodation expenses if their work trip is for more than six hours. EU rules allow the use of private jets if there are no commercial flights available. However, there are currently seven flights a day from Brussels airports to the Italian capital.

EU Foreign Affairs Chief Federica Mogherini is also under fire for a trip to Azerbaijan and Armenia which cost the EU taxpayer €75,000 ($88,170).

The commissioners protest that all the money was claimed by the book, but the public will be shocked by the lavish lifestyle of EU officials as they preach austerity to the general public, political analyst and former deputy speaker of the Belgian parliament Lode Vanoost told Radio Sputnik.

"The problem is that these procedures are hardly known by the public and if they did know they would disapprove of them. So, the problem is on a political and moral-ethical level, whether it is justified in times of such stringent austerity that the European Commission imposes on the public, that they lead such a lavish lifestyle on their expenses."

​"The European Commission is known to stay mostly within the rules. The problem is not that, the problem is that these rules are just unacceptable from a political, democratic point of view," Vanoost said.

In the past, the mainstream media didn't report on politicians' expenses because the high spending was seen as an accepted perk of the job.

"I myself, as a former politician in the 90s, was confronted by these practices already then, and I distinctly remember that in those days, a lot of journalists just ridiculed us for trying to oppose these practices, saying 'well, that's what everybody does.''

What Crisis? Juncker Claims He 'Saved' Greece as Austerity Continues to Bite
"I think what changed [the attitude] was the economic crisis. Now, the appalling thing is that these people act as if this is still the time when the sky was the limit with regard to what they spent, which is not the case. It is only right that this is now in the eye of the public, but the thing is that there is so much more going on with our, European taxpayers' money."

"The practice is widespread. What is so saddening about this, is that it is not just undermining the credibility of these institutions, but it is undermining democracy itself because the people have less and less belief in the system of parliamentary representative democracy."

While the EU commissioners' spending has come under scrutiny, the culture of high spending on expenses within the EU goes much further, Vanoost warned.

"As far as I'm concerned, this is just the tip of the iceberg, there is so much more underwater that is going on. Not just by the highest members, the European commissioners themselves, but by their staff, by several members of the European Parliament, and let's not forget a lot of these practices exist in national European parliaments as well."

All Eyes on Her! Mogherini Rocks Tehran, Iranian MPs Get Trolled for Selfie Race
Vanoost called for a debate on how public servants should be remunerated and for more transparency around the issue.

"I'm not claiming that these people shouldn't be given a decent payment for what they do, but it should be transparent … the amount that you get each month as salary should be sufficiently clear … when you do something in your job, you do not get extra pay for doing this or that, it's part of the job."

"That is something we need a profound debate on: how do we reward our political representatives?" Vanoost asked.