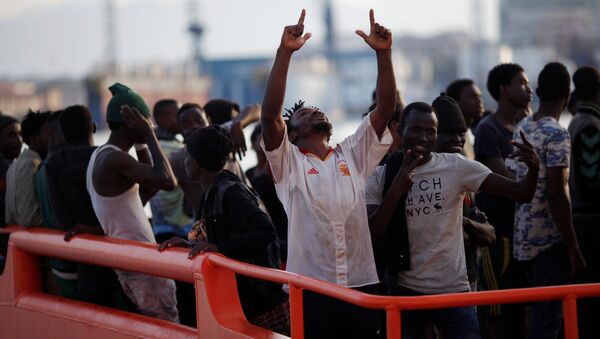 © REUTERS / Jon Nazca
Subscribe
International
India
Africa
Director of Regional Office for the EU Eugenio Ambrosi said that International Organization for Migration would like to see the 2017 trend for record refugee relocation numbers in the European Union to continue speeding up.

Almost 70,000 Migrants, Refugees Arrive in Europe by Sea in 2017 – IOM
MOSCOW (Sputnik) – The International Organization for Migration (IOM) would like to see the 2017 trend for record refugee relocation numbers in the European Union to continue speeding up, and for EU member states to fill their relocation quotas, Director of IOM’s Regional Office for the EU Eugenio Ambrosi told Sputnik on Wednesday.

"June 2017 witnessed a new record in terms of relocation, benefiting more than 2,000 people and some Member States have fulfilled their relocation obligations or are close to doing so. We would like to see this continue and accelerate further," Ambrosi said.

EU office director added that this would require political will and respect for relocation quota commitments, which may have to be maintained beyond the duration of the current relocation schemes until recast asylum law regulations dubbed Dublin IV come into force.

Ambrosi said that he could not comment on Germany's decision to start sending asylum seekers back to Greece, which is possible under Dublin Regulation, which allows to transfer refugees from an EU state to the one through which they entered the bloc. Germany previously suspended so-called Dublin transfers for a period.

"We do not comment on asylum management decisions reached between Germany and Greece under current EU regulations as that is their prerogative. We have however continuously called for more solidarity and support from EU Member States to front line states such as Greece and Italy to help to shoulder the responsibility for arrivals," Ambrosi said.

According to the EU regional office director, Germany accepted "the highest number of relocation beneficiaries and has also taken in many for family reunification."

"The EU relocation scheme is absolutely essential in this sense and progress must continue to be made, which in turn helps Greece and Italy to better cope with the people under their care," Ambrosi said.

According to IOM statistics, 96,438 migrants arrived in Italy by sea in the period between January 1 and August 6, while 11,713 people arrived in Greece. In the same period in 2016, the arrivals to Greece amounted to 160,888, and 99,727 people arrived to Italy. Greece and Italy have both been struggling to manage the influx of migrants. The EU relocation scheme is intended to relieve the pressure off the member states overwhelmed by the inflow of migrants. However, Poland, Hungary and Czech Republic have refused to take in migrants, which prompted the European Commission to launch legal cases against them.