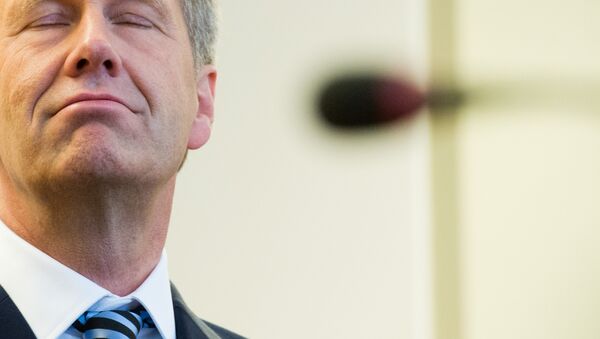 Mr. Wulff resigned in 2012 after a scandal over a 500,000 euro home loan he received when he was head of Lower Saxony.

He was once a deputy leader of Chancellor Angela Merkel's Christian Democrat Union (CDU) party, and was chosen by her to for the ceremonial role of president.

He stepped down from the presidency when it emerged that he had been offered a home loan and also received 720 euros (US$990) in hotel and entertainment costs from German film producer David Grnewold during a visit to Munich's Oktoberfest in 2008.

Mr. Wulff was later forced to apologize for leaving an angry and threatening message on the voicemail of Kai Diekmann, the then editor of Bild, Germany's most popular newspaper.

But in February 2014 he was cleared of any impropriety.

The Bild am Sonntag newspaper reported on Sunday, August 6, that Mr. Wulff had been working for Yargici's German arm since April, shortly before it launched its first shops in Germany.

"Basically it was Mr. Wulff who motivated the company to launch in Germany," said Yargici's managing director in Germany, Erik Schaap.

Yargici, which sells women's clothing, has been hugely successful in Turkey and Cyprus in the last 40 years and in Germany it hopes to cash in on custom from consumers, including the three million Turks who live in the country.

Mr. Wulff, who is a lawyer by profession, has been criticized by his political rivals.

"The life-long honorarium is supposed to be there so that former heads of state aren't forced to earn money," Mr. Stegner added.

Mr. Wulff's predecessor, Horst Kohler, gave up his lifetime income after resigning from the presidency after another scandal.

Mr. Wulff was only president for 19 months and during that time he became first German head of state to address the Turkish National Assembly, during which he urged immigrants to "actively engage themselves in our German society."

Before Mr. Wulff's trial in 2014, the only German head of state to be charged with criminal activities was Admiral Karl Donitz, who succeeded Hitler in 1945 and was accused of war crimes.

Earlier this year, Mrs. Merkel chose a prominent SPD politician, Frank-Walter Steinmeier, to be the next president, replacing Joachim Gauck, who had taken over from Mr. Wulff in 2012.