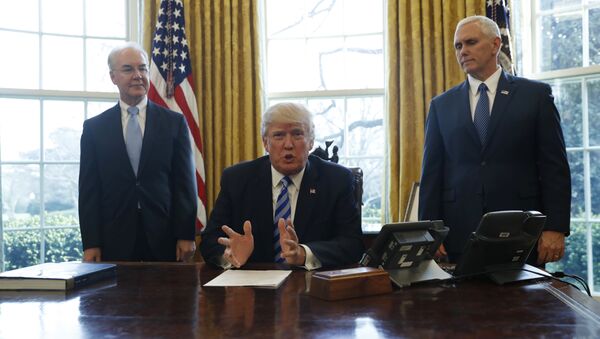 © AP Photo / Pablo Martinez Monsivais
Subscribe
International
India
Africa
President Donald Trump thinks the opioid problem in the United States including addiction to prescription drugs should be treated as an emergency, according to Health and Human Services Secretary Tom Price.

Trump Must Announce State of Emergency Over Opioid Epidemic - White House
WASHINGTON (Sputnik) — President Donald Trump thinks the opioid problem in the United States including addiction to prescription drugs should be treated as an emergency, Health and Human Services Secretary Tom Price said in a press conference in Bedminster, New Jersey.

"The president certainly believes that we will treat it as an emergency and it is an emergency," Price told reporters on Tuesday.

Although the White House is considering all possible options to fight the opioid crisis, the Trump administration has no intention to declare a national emergency at this time because the issue can be resolved without it, Price stated.

The US Health and Human Services department is currently working on a comprehensive plan to address the epidemic and will present it to Trump in the near future, Price added. The official noted that the issue remains one of the top priorities of the administration.