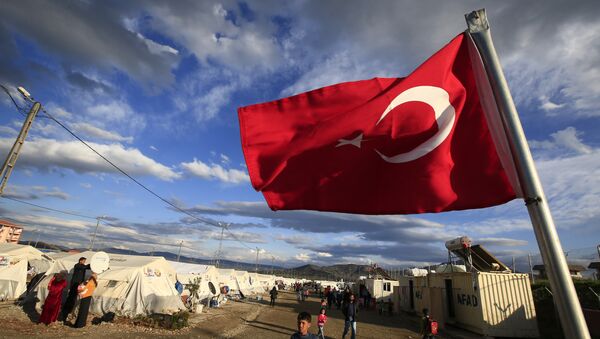 © AP Photo / Lefteris Pitarakis
Subscribe
Nearly 100,000 Syrian refugees will return to their hometown of Al Bab from Turkey until 2018 within a joint program, developed by Turkey's Family and Social Policies Ministry in cooperation with the United Nations High Commissioner for Refugees (UNHCR), Turkish media reported Tuesday.

Syrian Refugees 'Need to Know Conditions They Are Returning to'
ANKARA (Sputnik) – Under the program, the Turkish ministry and the United Nations will repair the infrastructure in the Syrian city of Al Bab, which is located close to the Turkish border, before 100,000 Syrian refugees will be moved there, the Hurriyet Daily News reported. According to the plan, a number of professionals will be sent to the area in September to recover roads, restart schools and hospitals, provide clean water supply and carry out other preparatory works for the upcoming return.

Some 70,000 Syrians, who fled the country for Turkey after the start of the civil war, have already come back to their homes in northern Syria after the Euphrates Shield Operation, carried out by the Turkish military and anti-government Free Syrian Army in Northern Syria between August 2016 and March 2017. Over 20,000 of these refugees re-settled in Al-Bab.

The Turkey-UN project also includes offering support for integration of 3.5 million Syrian refugees currently placed in Turkey. According to a recent Ankara university research, 27 percent of these refugees are not intended to return to Syria, the news outlet added.

The civil war in Syria, which sparked up in 2011, provoked a massive outflow of refugees, trying to find asylum in a number of neighboring countries. It is estimated that Turkey received the record number of Syrian refugees, over a half of the total of 6.3 million people. Only about 30 percent of the Syrians live in camps near the border, with Ankara's allocations for addressing the refugee problem piling up to $8 billion.