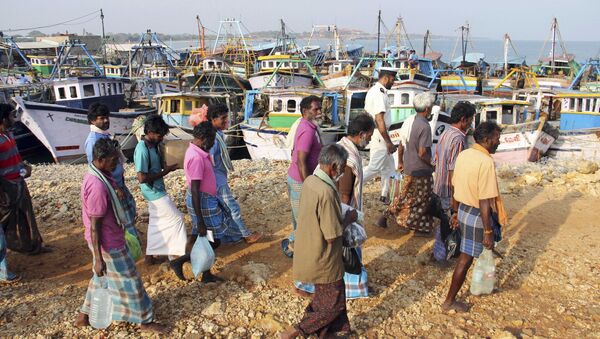 The fishermen, if found guilty of bottom trawling, will be imposed a heavy fine or face imprisonment of up to two years, according to Sri Lanka’s newly passed law.

India Sends Three Ships With Aid, Rescue Teams as Sri Lanka Reels Under Flood
New Delhi (Sputnik) – India has alleged that Sri Lankan Navy has apprehended 48 Indian fishermen and their boats after forcing them to surrender by firing in the air. The fishermen were allegedly rounded off from the Palk Strait area — the body of water running between India’s southeast coast and the northern tip of Sri Lanka.

The fishermen, belonging to Pudukottai and Jagadapattinam districts of Tamil Nadu in southern India, were taken to Kangesanthurai by the navy personnel. Twelve mechanized boats of the fishermen were also seized,” Shivakumar, a senior official of Tamil Nadu’s fisheries department told the Press Trust of India.

"They were escorted to the fisheries harbour in Karainagar in Jaffna. The fishermen would be handed over to the fisheries inspection office in Jaffna for further action," the Sri Lankan Navy said in a statement.

In the backdrop of recent backlash from Tamil Nadu’s fishing community after one fisherman was allegedly shot dead by the Sri Lankan Navy in May this year, the fresh arrests are likely to trigger a major headache for the Narendra Modi led government in New Delhi as fishermen have been demanding action by India against against the Lankan Navy personnel involved in the alleged killing. Sri Lankan Navy, however, continues t o deny the allegations.

Fishermen from both countries are arrested frequently by each other’s maritime security agencies as they often stray into illegal waters due to absence of any proper technology to confirm the maritime border.

However, of late, the bone of contention has become bottom trawling – a fishing activity banned by Sri Lanka for ecological concerns but widely carried out by fishermen of Tamil Nadu who are solely dependent on fishing for their livelihood. They argue that the waters claimed by Sri Lanka have historically been exploited by Tamil fishermen.
The governments of India and Sri Lanka are bound by the United Nations Convention on the Law of the Sea, which does not recognize maritime territory based on any historical claim. Therefore, for the Indian government, managing fishing-related disputes with Sri Lanka has been an exercise in balancing national interest-driven foreign policy with center-state political considerations.

India’s Minister for External Affairs VK Singh said on August 2 in Parliament that there were 15 Indian fishermen are in the custody of Sri Lankan authorities as on 31 July 2017. India has so far secured the release of 251 fishermen in Sri Lankan custody in 2017, he said.

Earlier this year, the Minister had said in Parliament, “India has consistently maintained that the fishermen issues involve long-standing livelihood and socio-economic practices and humanitarian concerns that need to be handled with great care and sensitivity.”

Prime Minister Narendra Modi, during his visit to Sri Lanka in May this year, had also raised the issue of frequent arrests of Indian fishermen by Lankan authorities.