Off the Hook: Weaning Russia Off the Dollar Key to National Security 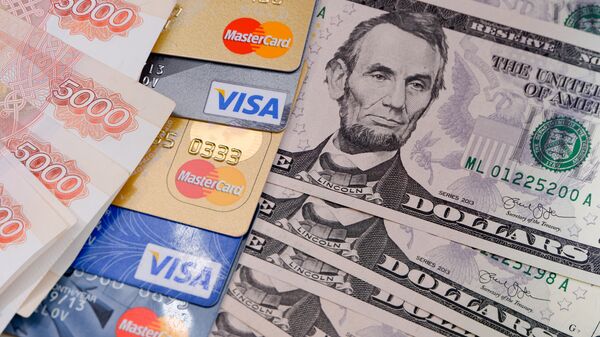 Commenting on Russian Deputy Foreign Minister Ryabkov's statement about the need for Moscow to decrease its dependence on the US financial system, a prominent Russian academician and financial analyst said that developing an independent payment system is "security matter" for Russia.

Sanctions War: 'Tough Game Where All Players Seek to Hurt Each Other'
Earlier Sergei Ryabkov said that it is important for Russia to create a working economic system that would be less dependent on the US dollar and on the US financial system as a whole. Otherwise, Ryabkov warned, the US will be able keep Russia "on the hook, which is exactly what they (the US) want."

Alexei Zubets, vice rector at the Financial University under the Government of the Russian Federation, told Radio Sputnik that the authorities are already working on this issue.

"It would be difficult to completely abandon the US financial system because over half of the world’s transactions are conducted using US dollars. In this case we’re talking about the US dollar as a unit of account, because the US could block Russian payments in international transactions at any moment – this is what we’re talking about, and it’s high time that we deal with it," Zubets said.

He added that Russia needs alternative, independent payment systems that do not depend on foreign processing centers, and that the Mir national payment system is a step in the right direction.

"This is a security matter. The Russian payment system needs to be independent, allowing us to live without fear of being hit by sanctions and getting our accounts blocked; it should allow us to use our money without having to worry about processing centers located beyond our country’s borders," Zubets explained.

Meanwhile, Dmitry Polevoy, chief economist for Russia & CIS region at ING Bank, warned that the Russian economy may not be able to become independent from the US dollar anytime soon due to the fact that Russia’s status as major exporter of raw materials – for example, oil – which is globally priced in US dollars.

"Therefore, a significant decrease in dependence on the US dollar can only be achieved by increasing the volume of non-raw material trade with the non-USD bloc countries," Polevoy said.

However, chief economist of the Eurasian Development Bank Yaroslav Lissovolik pointed out that coordinated efforts by energy resources’ exporters may help them trade raw materials using national currencies and not just US dollars.

"For example, if Russia and certain other natural gas exporting countries were to form an alliance, it would afford them more options for trading their commodity using payments in national currencies," he remarked.

As a response to this development, Russian authorities moved to reduce the country’s dependency on the US currency and its payment systems.