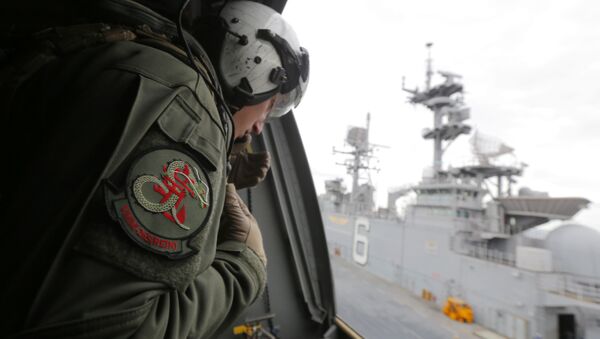 For the first time, the US Marine Corps is considering a plan that would allow women to attend what has historically been male-only combat training in Southern California, American Press reported.

If the plan is approved by Marine leaders, which it could be as early as next spring, it could signal the onset of a new program under which male and female marines would train together.

The officials have not publicly discussed the plan because negotiations are still underway. However, General Glenn Walters, assistant commandant of the Marine Corps, suggested that the final decision will depend on multiple factors such as logistics and cost benefits. He also added that, "If we're going to change the culture of the Marine Corps, we need to change how we're organized. Our recruit training is a component of that."

Congress has repeatedly criticized the Marines for being the only military service that separates men and women during boot camp and has repeatedly urged the Corps to change their gender segregation policies, which they claim contribute to an environment that has allowed the pervasive sexual assault and harassment of female Marines.

The Marine officials' typical retort to critical Congress has been that separating men from women is necessary for two main reasons: It increases the women's physical competitiveness before they join males for additional training and it provides female Marines with the support they may need during boot camp. Women are a minority in the Marines, making up only 8.4 percent of the corps.

However, some Marine Corps officials are realizing that training some of the male recruits in San Diego in the absence of women is resulting in disciplinary issues that might be resolved if the male Marines interact with more females during training.

Marine leaders have also been persistently accused of being hostile to women. This spring, a huge nude-photo sharing scandal greatly tarnished the reputation of the service.

A few months ago, thousands of sexually explicit photos of female marines, often accompanied by pejorative and violent comments, were shared on various social media platforms and websites.

According to a statement by the Marine Corps, "Since February, the Naval Criminal Investigative Service has scanned nearly 131,000 images across 168 social media sites and has reviewed information related to 89 persons of interest as a result of the incidents related to the nonconsensual sharing of explicit photos and other online misconduct."

The statement goes on to read that the Marine Corps "remains committed to addressing and evolving our culture by changing the way we educate, train and lead our Marines — we will not tolerate a lack of respect for any member of our team."

The nude-photo sharing investigation has resulted in 33 Marines facing repercussions to date. No punishment was taken against 12 other Marines, and two more are still awaiting the outcomes of their cases.

According to Major Iain Pedden, the Marine Corps' head of military justice, five Marine lieutenant colonels have been dismissed this past year, two of whom were relieved of duty due to inappropriate conduct involving women.

For the past several months, a Marine task force has been reviewing ways to reduce bad behavior problems. Combined combat training in California might be a step in the right direction.