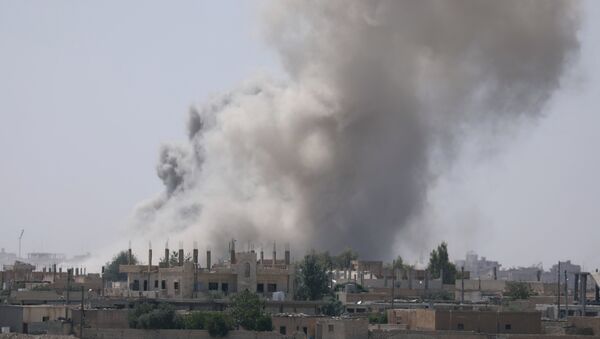 © REUTERS / Rodi Said
Subscribe
US-led coalition jets have carried out a series of anti-Daesh airstrikes in Syria, destroying the group's fighting positions, vehicles, mortar systems and a tunnel near Raqqa.

WASHINGTON (Sputnik) — The US-led coalition against Daesh (banned in Russia) destroyed 30 of the terror group’s fighting positions and numerous other targets with strikes in Syria on Sunday, Operation Inherent Resolve said in a press release.

The coalition conducted four additional strikes in Syria on Sunday, destroying four Daesh oil stills, a mortar system and a vehicle and damaging other targets near Abu Kamal, Al Shadaddi and Deir ez-Zor.

The US-led coalition of more than 70 members is conducting airstrikes, ground-based and rocket-propelled artillery fire against Daesh in Syria and Iraq. The strikes in Iraq are conducted in support of the Iraqi government, but those in Syria are not authorized by the UN Security Council or the government of President Bashar Assad.