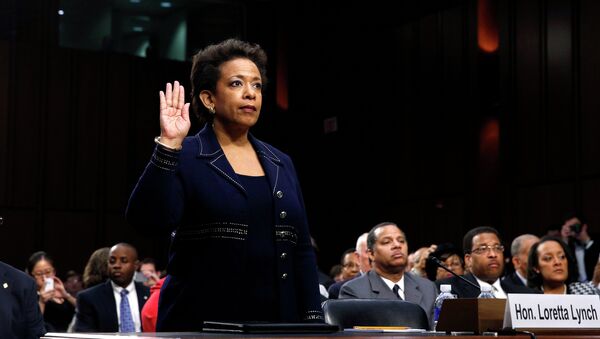 © REUTERS / Kevin Lamarque
Subscribe
US Justice Department head Loretta Lynch infamously met with former President Bill Clinton on the tarmac at an Arizona airport for 30 minutes in 2016 – while Clinton’s wife, Hillary, was running for president and while Lynch was working with the FBI to investigate Hillary’s email servers.

Following the scandal she used the pseudonym “Elizabeth Carlisle” to communicate over email about press talking points.

During the first wave of Freedom of Information Act Requests about the meeting, the Justice Department had maintained that no information about the Lynch-Clinton tarmac chat existed. It has now been revealed, thanks to lawsuits filed by two conservative watch groups, that hundreds of documents relating to the event were generated, primarily on how to respond to the media and how to justify what happened.

The email address associated with Elizabeth Carlisle “was and is known to the individuals who process [Freedom of Information Act requests],” Lynch’s attorney told the Daily Caller, adding “the practice, similar to using initials or numbers in an email, helps guard against security risks and prevent inundation of mailboxes.”

The use of email aliases by public figures isn’t new, but critics of the practice say it can make the process of tracking any requested emails and documents more difficult.

Following the incident, Lynch said the June 27 meeting with the 42nd president was focused “a great deal [on] his grandchildren.”

“It was primar[ily] social and about our travels.”

Nevertheless, the Justice Department Office of Public Affairs scrambled to figure out how to respond to the incident, which appeared to many like Obama administration collusion with the Clinton campaign and which formerly imprisoned journalist Barrett Brown called an “unprecedented failure of justice.”

Lynch said "there was no discussion of Benghazi, no discussion of the state department emails, by way of example … I would say the current news of the day was the Brexit decision, and what that might mean."

Not long after the tarmac meeting, on July 5, the FBI announced that Hillary Clinton would not be probed under a criminal suit because, according then FBI-Director James Comey, "no reasonable prosecutor would bring such a case [to court]."

Furthermore, 81 new witnesses and 75,000 new pages of documentation surrounding the investigation into Benghazi attack, in which four Americans, including US Ambassador to Libya J. Christopher Stevens, were slain by the Salafist jihadist terror group Ansar al-Sharia, were highlighted in a report published by the DoJ in response to a House request. The Benghazi report was released one day after the mysterious runway meeting.

Judicial Watch and the American Center for Law and Justice have sued the Justice Department over the highly untimely meeting.