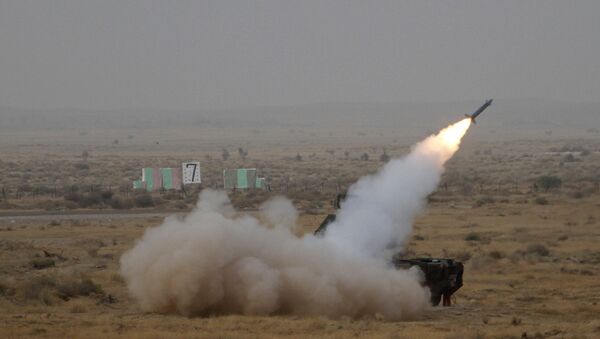 The ballistic missile defense grid that will protect the western and northern regions of the country will help guard New Delhi and Mumbai.

Once Aimed at Pakistan, Indian Nuclear Program Sets Missile Sights on China
New Delhi (Sputnik) — India has decided to install its homemade ballistic missile defense systems at two villages in the western state of Rajasthan. The villages in Alwar and Pali are both less than 800 kilometers from the Pakistani capital Islamabad.

The counter attack missiles will be able to provide double layered security with the capacity to shoot down enemy missiles both within the earth's atmosphere (endo-atmospheric) and outside it (exo-atmospheric). State owned Defense Research and Development Organization (DRDO) had conceived the programme in 1999 and since then, the programme has witnessed many trials and upgrades.

The ready version consists of long-range tracking radar developed in partnership with Israeli company Elta. The second component is a computerized command and control system that plots and predicts the intruding missile's flight path and assigns interceptor missiles to destroy it. The third component is the interceptor missiles and includes the endo-atmospheric missile can intercept incoming targets at an altitude of 15 to 25 kilometers and the exo-atmospheric missile can kill an incoming ballistic missile within the range of 2000km. DRDO has claimed that the strike range of the exo-atmospheric missile is being upgraded to 5000 km.

India, Pakistan Missile Race Continues Unabated
Some more tests will be conducted in the coming months before the system is commissioned into the Indian armed forces. The latest successful tests of the endo-atmospheric as well as exo-atmospheric interceptor missiles were conducted in March this year.

"The complete event including the engagement and destruction was tracked by a number of electro-optical tracking systems using infrared imagery. The launch has proved the Ballistic Missile Defence (BMD) prowess of the country," DRDO had claimed on March 1 this year.

With this capability, India has now entered the elite league of nations having this capability. The other four countries are US, Russia, Israel and France.

India's decision to install the advance ballistic missile system near its border with Pakistan stems from the fact that the two nuclear-armed neighbors are engaged in a prolonged territorial dispute and have gone to war three times after their partition in 1947.