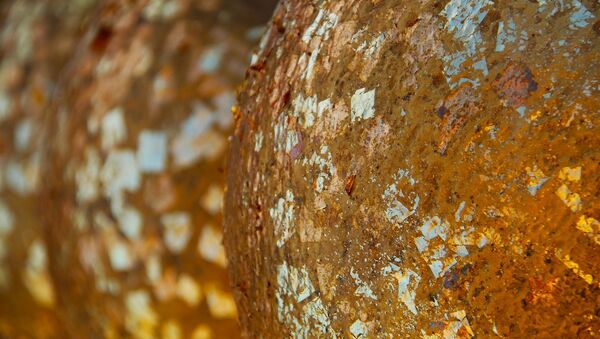 Tiny flecks of gold could be used in the fight against cancer, new research has suggested. Scientists at Edinburgh University have completed a study which shows the precious metal increased the effectiveness of drugs used to treat lung cancer cells.

Researchers, led by Dr. Asier Unciti-Broceta, have discovered the gold has the ability to act as a catalyst for chemotherapy.

A tiny gold device was shown to be effective after being implanted in the brain of a zebrafish.

The study was carried out in collaboration with Spanish researchers at the University of Zaragoza's Institute of Nanoscience and was funded by Cancer Research UK and the Engineering and Physical Sciences Research Council.

"Most of the properties of gold are very well known. We have used gold for thousands of years because it is very safe, but also for aesthetics, but it is the safest metal and is used in dental restoration," Dr. Unciti-Broceta told Sputnik.

"What we have discovered now is that finely divided pieces of gold inside of a device can work as a catalyst to chemically make chemotherapy drugs, only in the place where the gold is.

"And this is a big thing because what we can do is that instead of making drugs in the pharmaceutical industry we start with this safe starting material to prepare drug precursors and only where the drug is will it be activated," he added.

"The gold itself is doing nothing to the cells, so the implant can be placed for example in a brain tumor, and there it will do absolutely nothing, but then we have designed precursors which, within the device, will become the drug… The big advantage is that all the healthy organs will be unaffected by the chemotherapy," Dr. Unciti-Broceta told Sputnik.

Dr. Unciti-Broceta said it was difficult to know how long it would take for it to be widely used, and he said this would depend on clinical trials, which sometimes take years.

"If we had the support of a pharmaceutical company we could in 10 years, 12 years, be in the market," he told Sputnik.

"The important thing is that this technology could be applied for many different platforms," he added.

He said it could be used to treat brain tumors, such as glioblastoma multiforme (GBM), which is among the hardest to treat with chemotherapy.

"Right now brain tumors are the most difficult to treat and that is why we are focusing on that," said Dr. Unciti-Broceta, who said the technology was not particularly expensive because only tiny amounts of gold were used.