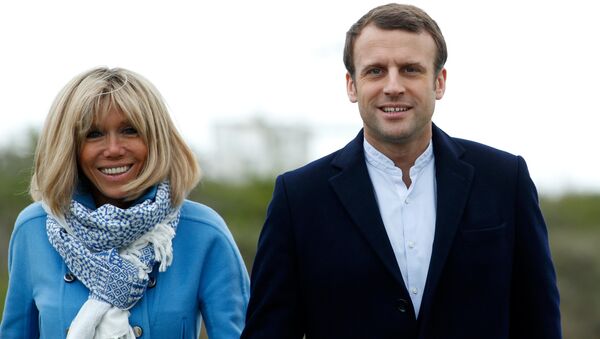 More than 190,000 people have expressed their opposition toward French President Emmanuel Macron’s initiative to create an official First Lady status for his wife, Brigitte Macron, as of Monday morning.

MOSCOW (Sputnik) – The online petition was published on the change.org platform and created by Thierry Paul Valette, the founder of the "national equality" movement.

"The context for such a reform is in no way appropriate. We are currently on the way to reforming the moralization of political life. We ask the deputies not to hire their family members anymore. The French citizens still remember the affair of Francois and Penelope Fillon. It is not the right moment to treat it case by case and give money [from the French budget] and judicial legitimacy to Brigitte Macron who, unlike her husband, has not been elected," Valette told LCI broadcaster, commenting on the proposed petition.

Not Again! Russians Allegedly Targeted Macron Campaign Staff on Facebook
The petition specifies that, if enacted, the special status would allow the first lady benefit from the French budget.

During his presidential campaign, Macron, who took office in May, said that he wanted to create the position for his wife in order to clarify her status, promising that no public funds would be used to pay her.

Under French laws, the president's wife is allowed an office, staff, security guards, which are covered by the state budget and are etimated at 450,000 euros ($531,100) a year, according to official auditors.