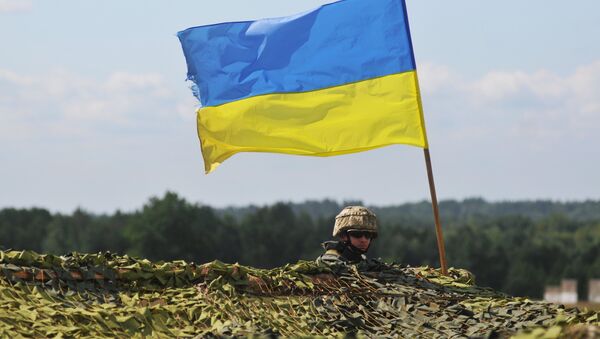 "In government-controlled Sopyne the SMM observed about 40-50 residents (of various ages, over half of whom were women) angrily confront 10 Ukrainian Armed Forces soldiers," the SMM said in a report on August 3.

Kiev May Perceive US Weapons Deliveries as Motivation to 'Aggression' in Donbass
Residents told the observers that they were angry that soldiers were building a dugout on the territory of their village.

"The SMM saw a fresh 2m-deep dugout about 20m from the nearest house. After the soldiers withdrew from the area the SMM observed some residents filling it in with shovels," the report added.

Commenting on the incident, the Ukrainian military said that its personnel had to stop the construction of fortifications in Sopyne due to the resistance of locals.

"Local residents were outraged that Ukrainian forces were building fortifications there. Understanding their unwillingness to be near the defense line, our personnel decided to stop the works," the command of Kiev’s military operation in Donbass said in a statement on Facebook.

"This incident is yet another proof that the current Ukrainian government has no moral limits. The military wanted to set up fortifications in an area where civilians live," Rudenko said.

At the same time, according to the lawmaker, it was "surprising" that the SMM registered the incident and included it in a report.

"Its previous reports show OSCE observers’ reluctance to report on any violations by Ukrainian forces. Possibly, this is a sign of some progress. Maybe, the SMM will stop turning a blind eye on war crimes committed by Ukrainian troops. We hope that the situation will change and Western moral and information support for the Ukrainian government will decrease and an adequate approach will prevail, including towards those crimes," Rudenko said.

The cease-fire regime in Donbass has seen numerous violations in recent weeks. DPR and Kiev forces have repeatedly accused each of breaching the cease-fire. Amid the growing number of cease-fire violations, experts warn about a possible escalation in the region.

DPR Rep Confirms Agreement With Ukraine on Donbass Truce From June 1
The Donbass conflict erupted in April 2014 as a local counter-reaction to the Maidan coup in Kiev that had toppled President Viktor Yanukovych in February. Residents of the Donetsk and Lugansk regions held independence referendums and proclaimed the People's Republics of Donetsk and Lugansk. Kiev has since been conducting a military operation, encountering stiff local resistance.

000000
Popular comments
So the people have just about had enough and the Ukro-forces are demoralised enough to be put to flight by unarmed people!! Good for the people!! Signs of the worm turning!!

sapper
6 August 2017, 14:49 GMT3
000000
God bless the peoples of the Donbass. Keep up your good faith for evil cannot prevail against it. I just read a deeply touching report about an Indian Boxer and how he too, made an amazing gesture to try and heal the ongoing border dispute between China and India. www.theguardian.com/world/2017/aug/06/i-dont-want-tension-indian-boxer-beats-china-rival-then-offers Why is the world dissolving into absolute madness? Have leaders forgotten the horrors of war and the unmitigated anguish it brings?