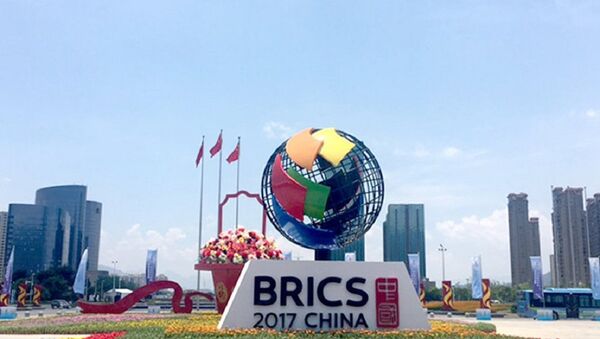 Tensions between India and China continue to rise as the Chinese government once again urged India to immediately withdraw its troops from the Doklam Plateau. Radio Sputnik spoke to an expert Dr. Rajeswari Rajagopalan about the dispute.

New Aftergrowth in India, China Doklam Dispute
The conflict between the two countries in the disputed area, known as "Doklam" in India and "Donglang" in China, began in early June, after Chinese workers had begun building a highway through the area, triggering a protest from Bhutan.

China in its turn claims that Indian troops crossed the border at Sikkim in mid-June to stop the People’s Liberation Army (PLA) from constructing a road in Donglang.

Radio Sputnik discussed the border dispute between China and India with Dr. Rajeswari Rajagopalan, senior fellow and head of the nuclear and space policy initiative at the Observer Research Foundation, New Delhi.

“Much of the border between India and China has been disputed, but this part has been more unsettled although there is no formal agreement between China and India and nor have they officially disputed it, but there is a big dispute between China and Bhutan’s border line,” Rajagopalan said.

She further said that the crisis began when China began construction “illegally in Bhutan’s territory.”

Talking about how likely is the latest standoff going to develop into a military conflict, the expert said that, “China’s People’s Liberation Army just marked its 90th anniversary and Xi Jinping would not want to be seen like his country is a weak power, he would want to project China as a strong power, similarly considering the anti-India rhetoric that China has been doing it is difficult for it to back off now.”

First Ever Army Day Parade Kicks Off in China, President Xi Inspects Troops
According to Rajagopalan, India will also not back off because it is important for the Indian security and also for Bhutan.

If China gets access into Bhutanese territory through the Doklam Plateau, through the road that they are trying to construct, then the Chinese forces have easy access to the Indian narrow corridor which connects the Indian mainland to its seven northeastern states, so strategically its very sensitive for India to stop forces coming into that area, the expert said.

Bhutan asked Indian troops stationed in the area to come and intervene and Indian troops do have a strong presence in that region especially the Indian Air Force.

However, despite the rising tensions, the expert thinks that it may be possible to resolve the crisis in a diplomatic manner.

“India will not push this crisis into the agenda and I don’t think the BRICS countries would want to get entangled into a bilateral conflict with India and China over this because India also has a great influence over these countries,” she concluded.

BRICS is an association of five developing economies: Brazil, Russia, India, China and South Africa. The member states' objective is to enhance cooperation among themselves and strengthen the efforts of other international organizations working for world betterment in a number of spheres.