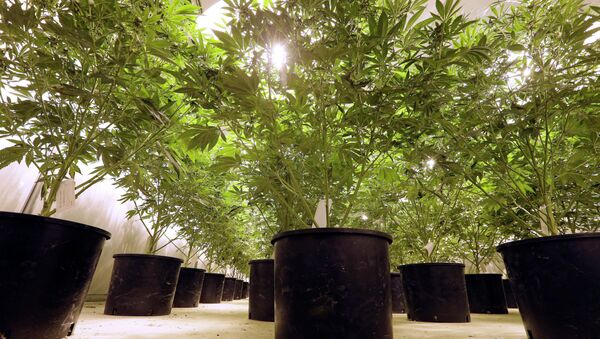 A for-profit weed company has seen the future of the pot business in the US, and is taking steps to be on the forefront of the burgeoning movement.

US Support for Marijuana Legalization Hits All-Time High - Poll
In one of the growing number of states in the US where the recreational use of marijuana has become legal, a publicly-traded company specializing in cannabis-related products has bought a small town with the intention of turning it into a sustainable pot-friendly village.

The American Green Corporation has committed to purchasing the town of Nipton, California, for $5 million, and will acquire — alongside the right to lay down the local law — several small structures, including a hotel, a school, hot mineral springs and a general store, according to a report from Bloomberg.

Company spokesman David Gwyther is delighted with his firm's purchase.

"The cannabis revolution that's going on here in the US has the power to completely revitalize communities in the same way gold did during the 19th century," Gwyther enthused, cited by the BBC.

Located just inside the California border with Nevada, the tiny desert outpost of Nipton — originally built beside a gold mine in the late 19th century — is uniquely situated just nine miles off of the heavily-traveled Los Angeles/Las Vegas Route 15 traffic corridor, making easy access for those traversing the popular highway that connects the two global destinations.

The company is seeking to invest some $2.5m in the town of 20 souls over the next year-and-a-half to make it visitor-centered and, in a useful branding move, eco-friendly and energy self-sustaining as well, through the use of the desert's readily-available wind and solar power.

According to American Green employee Stephen Shearin, the move will show "that there was a viable means of having a cannabis-friendly municipality and further making it energy independent," adding that the purchase and creation of Nipton as a pot-friendly village may inspire others to do the same, cited by Bloomberg.

As there currently isn't much "there" there — aside from the stark beauty of desert desolation — it's likely that improvements can be made to what passes for urban Nipton and provide for a rebirth, of sorts, in the desert.