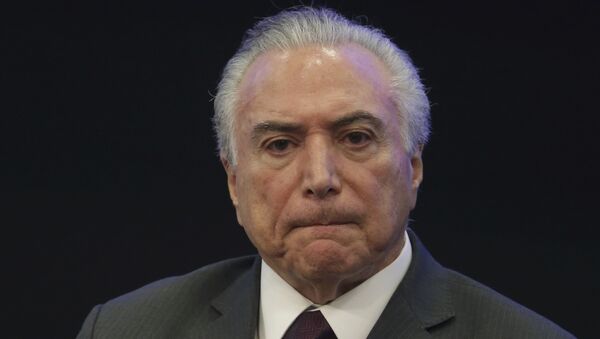 © AP Photo / Eraldo Peres
Subscribe
International
India
Africa
Brazilian President Michel Temer narrowly survived a corruption vote in the country’s Congress on Thursday that would have put him on trial.

The 342 votes threshold for the motion pass wasn’t met, as 263 voted against the motion and 227 voted in favor in the 513-seat chamber. Temer was accused of pressuring a top executive in Brazil’s national oil company, Petrobas, into giving him hundreds of thousands of dollars in campaign money.

​Radio Sputnik’s Loud and Clear speaks with Dr. Francisco Dominguez, head of the Centre for Brazilian and Latin American Studies, about the vote and why the US has remained relatively quiet about what he calls the erosion of the rule of law in Brazil while salivating over the current political unrest in Venezuela.

Dominguez said there had already been large general strikes in Brazil following the 2016 ouster of former President Dilma Rousseff of the Worker’s Party, including one that garnered the support of 45 million workers because, having expelled her, "the government is violating the constitution and the law literally every single minute of the day."

Temer, who was once Rousseff’s vice president, became a key player in impeachment proceedings against her.

Temer’s colleagues in Congress essentially attempted to sweep the charges against the president under the rug, "which is absolutely unbelieveable," Dominguez said. "Anywhere else in the world where there is something called the rule of law, on the basis of irrefutable evidence of corruption which blatant, flagrant and open … something should’ve been done about it. Because of the constitutional arrangement in Brazil, they decided by a simple vote to stop it."

"The situation was that there was absolutely irrefutable evidence which was in the public domain, publicized and processed by people from the judiciary, but the kleptocrats decided they had the numbers to save [Temer’s] skin," he said.

Dominguez believes that ultimately greed and self interest drove yesterday’s decision. "If they were to accept the charges and trial against Michel Temer, they would be completely open themselves to be liable to be investigated and tried for corruption," he said, "because about 40 to 60 percent of the people in Congress actually face these kinds of charges and some have been convicted of corruption."

Loud and Clear Host Brian Becker pointed out that there hasn’t been any outcry from the US government about Temer and asked Dominguez why he thought that was so.

"The key to the US double standard is a huge amount of very rich, wealthy, lucrative operations… such as the oil industry, which is being privatized," in Brazil, Dominguez replied.

Becker noted that although Washington has not weighed in on Brazilian government affairs, it has been very vocal on the recent political turmoil in Venezuela. Dominguez said this is because "Venezuela is blessed and cursed with having some of the largest oil reserves on the planet, and the United States is absolutely determined to lay their hands on it."