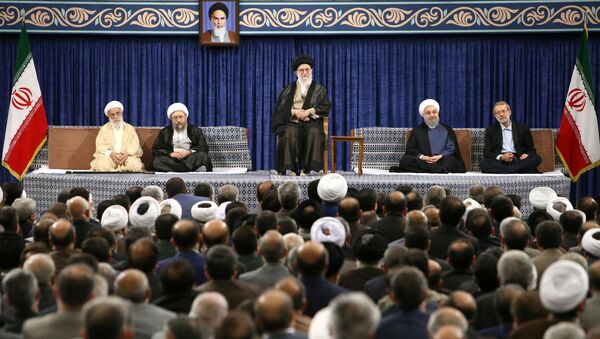 The inauguration ceremony of reelected Iranian President Hassan Rouhani was held in Tehran on Saturday.

How Re-Election of Iranian President Rouhani Could Affect Global Economy
MOSCOW (Sputnik) — The ceremony was broadcast by the IRIB TV channel.

On Thursday, the first part of the inauguration took place, as Iranian Supreme Leader Ayatollah Ali Khamenei approved the results of the elections, held on May 19, and confirmed Rouhani as the country’s president.

Earlier on Saturday, the second part of the ceremony was held at the Iranian Parliament –the swearing-in of the president. The ceremony started at 05:30 p.m. local time (12:30 GMT), with an orchestra playing the the national anthem. Several verses from the Quran were read as well, and then speaker of the country’s Parliament Ali Larijani and head of the country’s judiciary Sadeq Amoli Larijani addressed the guests of the ceremony.

After that, Rouhani read and signed the text of the oath, and promised to use all his powers to protect the religion, order in the country and the constitution.

According to official data, guests from 92 countries attended the ceremony.

The presidential election in Iran took place on May 19. Rouhani was reelected for a second term in office by gaining 57 percent of votes with the turnout amounting to 70 percent. Rouhani's key opponent ayatollah Ebrahim Raisi, the country’s former Prosecutor General, came second with 38 percent of votes.