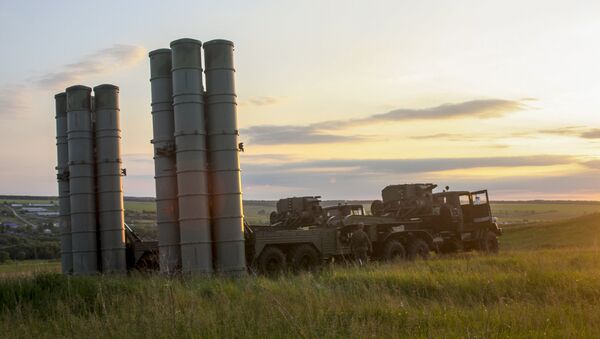 The Chinese People's Liberation Army Rocket Force has brought own S-300 Favorit air defense systems bought from Russia to participate in the Keys to the Sky contest within the International Army Games in 2017, the chief of the Chinese delegation to the contest said Saturday.

S-300 Anti-Aircraft Missiles Light Up 2017 Int'l Army Games (VIDEO)
ASHULUK TRAINING AREA (Sputnik) — The S-300 missile systems have been modernized repeatedly to remain state-of-the-art airplane- and rocket-destruction machines. The S-300PMU2 Favorit can launch six missiles at once, each capable of destroying aircraft flying at several times the maximum speed of the F-16 and F-22 fighter jets, as well as intercepting ballistic targets.

"The Chinese People's Liberation Army Rocket Force has taken its equipment to the Keys to the Sky contest for the first time. It is a major test for us to check the capabilities of transporting the special equipment by long distances and of the technical maintenance. After arriving at the Ashuluk training area we have noticed that the organizers provided us with very comfortable conditions and everything has already been prepared," the official told reporters.

According to the representative of the Chinese delegation, the teams of Russia, Belarus and Kazakhstan at the contest had been well trained and the Chinese team should follow their examples.

The 2017 International Army Games, an annual military competition held since 2015 on the initiative of the Russian defense minister, kicked off on July 29 and will continue through August 12.