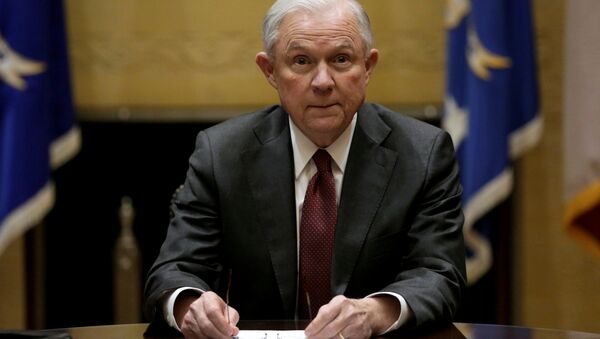 © REUTERS / Yuri Gripas
Subscribe
International
India
Africa
"Beleaguered" US Attorney General Jeff Sessions on Friday announced long-anticipated plans to initiate a new war on leaks, stating, "this culture of leaking must stop." But the crackdown means the US government will have greater authority to subpoena media organizations for exercising First Amendment rights.

The department may begin to hunt down media organizations that publish sensitive information and ask reporters to reveal sources.

Former CIA analyst and whistleblower John Kiriakou, who unveiled US practices of waterboarding as torture in 2007 and is currently a fellow with the Institute for Policy Studies, spoke with Eugene Puryear on Radio Sputnik’s By Any Means Necessary on Friday to discuss the new DoJ initiative.

​"This is a very dangerous extension of what was begun by Eric Holder," attorney general in the Obama administration from 2009 until April 2015. Kiriakou pointed to a case in which a New York Times reporter was asked by the Justice Department to disclose his sources:  When the writer took his case to the Supreme Court, the court ruled that the law was in favor of the Justice Department practice despite the fact that it seemed "patently" unconstitutional to laymen.

"In my view," Kiriakou said, the DoJ push will result in a "First Amendment constitutional crisis."

The notion that injustices within the intelligence community can be addressed and resolved by internal processes is "utter nonsense," Kiriakou told By Any Means Necessary. Others within the intelligence circles have corroborated this sentiment. CIA contractor John Reidy said in July that "the public has to realize that whistleblowers can follow all the rules and get nothing done."

Sessions continues to beat the drums of war against leakers, who have drawn more than a little public ire from the 45th president. "For our friends in the intelligence community, the Department of Justice is open for business. And I have this warning for would-be leakers: Don’t do it," he said during the Friday announcement.

While the Justice Department has respect for media organizations, "it’s not unlimited," the former Alabama senator said, adding "they cannot put lives at risk with impunity." In a line that sounded like it was written by George Orwell in "Nineteen Eighty-Four," Sessions said "we must balance the press’ role with protecting national security."